Riverboat cruise provides opportunity to watch history in the making 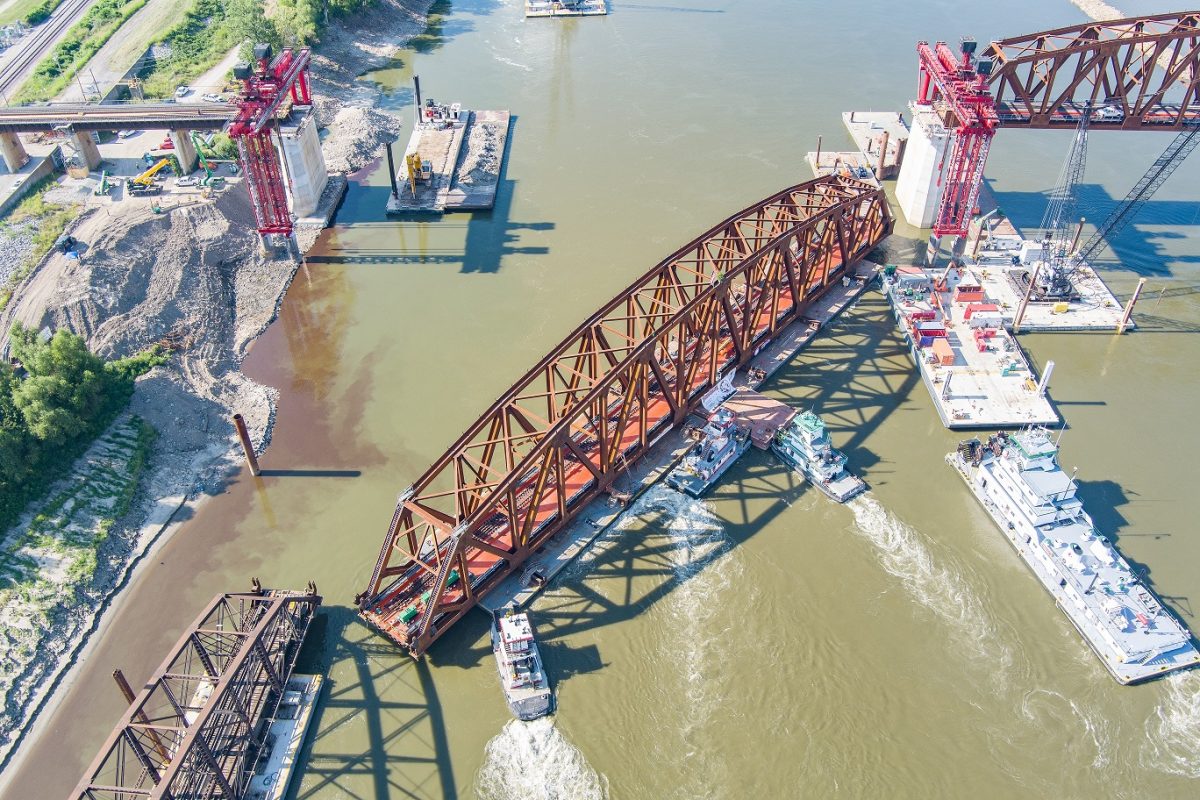 The $222 million project to replace the Merchants Bridge that links Missouri and Illinois near downtown St. Louis is nearing completion, and the St. Louis Regional Freightway gave invited guests and the public the opportunity to see one of the last significant milestones in the project firsthand from the special vantage point of a riverboat cruise on Aug. 26, 2022.

Passengers on board witnessed history in the making as preparations continued for the third and final bridge truss to be floated into place. The installation is a crucial phase of the project underway to replace the vital rail artery across the Mississippi River, which is one of the nation’s primary east-west rail corridors serving one of America’s largest rail hubs by car interchange volume and gross tonnage. Dating back to the 1890s, the Merchants Bridge serves six Class I railroads and Amtrak as a bridge crossing across the Mississippi River at St. Louis, and replacement of the structure has been the bi-state St. Louis region’s top freight infrastructure priority since 2016.

Owned by Terminal Railroad Association of St. Louis (TRRA), the Merchants Bridge required reconstruction due to speed, clearance and load restrictions. The overall project includes the removal and replacement of the three river-span trusses, seismically retrofitting the existing river piers, and improving the east approach. Work began in 2018 and, when completed in the coming weeks, the new double-track bridge will provide reliable, resilient and expanded freight and passenger rail capacity, helping move freight faster, cost effectively and more reliably, providing an alternative to more congested rail hubs like Chicago.

“In TRRA’s 133-year history helping to ensure the smooth movement of rail freight, our company has never built a bridge, but today we’re marking a critical milestone in the final steps to deliver our first major bridge infrastructure project – a project that will dramatically improve the flow of both freight and passenger rail traffic through the bi-state St. Louis region,” said Asim Raza, Chief Legal Officer, Director of Corporate Affairs for Terminal Railroad Association of St. Louis.

As a design-bid-build project, reconstruction of the bridge uses innovative project delivery methods that have improved safety and speeded completion while limiting bridge and river traffic outages. The new spans were all constructed in Wisconsin and shipped to St. Louis for final assembly on the Missouri bank of the Mississippi River and each has been floated into place immediately after the old spans were floated out.

Removal and installation of the three new trusses required three separate 10-day rail outages, and three separate river channel outages. The first of these outages began on Sept. 13, 2021, in preparation for the first truss to be moved into position and floated into place on Sept. 17. The second truss was installed in early March 2022. The final truss was floated into place and installed on Aug. 26 and 27, with a portion of that process viewed by approximately 130 on board the riverboat cruise that provided the opportunity to witness that piece of history. Representatives from TRRA and Walsh Construction, the general contractor for the project, provided an overview of the project, its significance to the nation’s freight network, and the steps involved in placing the trusses.

The replacement of this vital rail artery has been identified each year for the past several years as the region’s top freight infrastructure priority by the St. Louis Regional Freightway, which is nationally recognized for its innovative and collaborative approach to creating a Priority Projects List that identifies key infrastructure projects and advocates for funding for them.

In 2020, the Federal Railroad Administration (FRA) awarded TRRA a $21.45 million Consolidated Rail Infrastructure and Safety Improvements (CRISI) grant toward replacement of the Merchants Bridge. TRRA is providing 90 percent of the construction costs, making this project a model for public-private partnerships.

“The Merchants Bridge has been our highest priority project because of its significance in the nation’s freight network,” said Mary Lamie, Executive Vice President – Multi Modal Enterprises at Bi-State Development, which launched the St. Louis Regional Freightway in 2014 with a key goal of advancing infrastructure projects that support the movement of freight through the bi-state St. Louis region. “Its completion will not only strengthen a vital link in the nation’s freight network, it also reaffirms we are on the right path with our approach.”

Joining Walsh Construction as part of the project team for the nationally significant Merchants Bridge project is TranSystems and Burns & McDonnell, who are serving as the project engineers. The steel was fabricated by Veritas Steel in Eau Claire, Wisconsin.

About Terminal Railroad Association of St. Louis (TRRA)
The TRRA is a Class III railroad serving over 75 industrial customers in the St. Louis region and providing interchange services to Class I railroads serving the East and West Coasts and the Great Lakes to the Gulf of Mexico. These services provide cost-efficient transportation options to area businesses in a critical hub connecting the St. Louis region to the national and global marketplace.