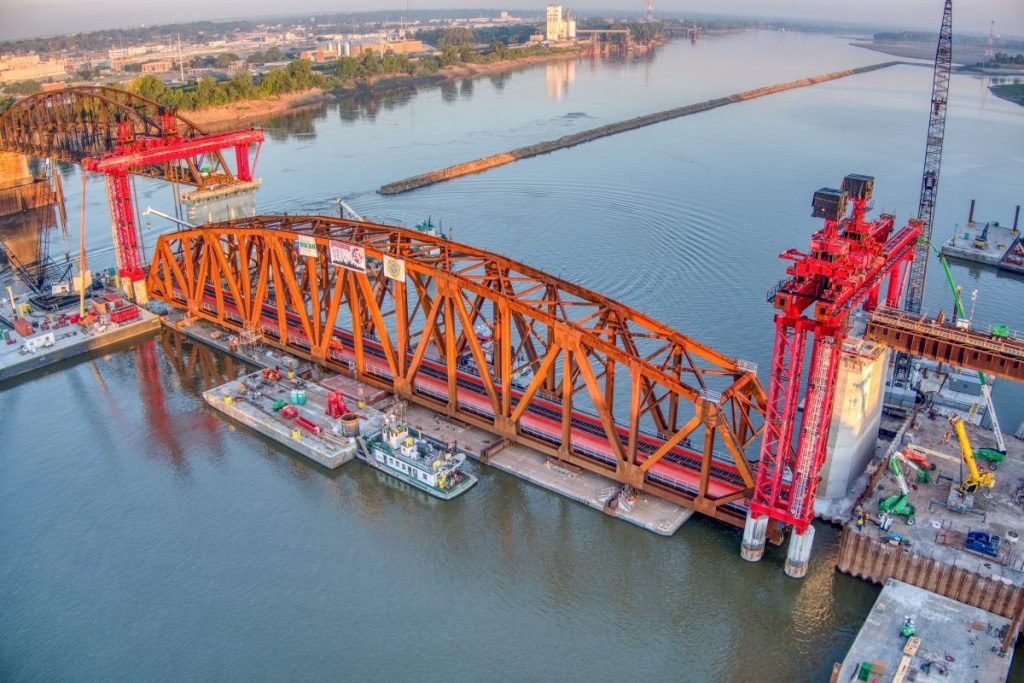 The $222 million project to replace the Merchants Bridge that links Missouri and Illinois near downtown St. Louis is nearing completion, and the St. Louis Regional Freightway is providing a rare opportunity to see one of the last significant milestones in the project firsthand from the unique perspective of a riverboat cruise on Friday, Aug. 26.

A limited number of tickets will be available for members of the public who would like to join invited guests and media for the cruise, which will begin boarding at 11:30 a.m., depart at 12 noon and return to the dock at 1:30 p.m. Tickets can be purchased on a first-come-first-served basis at https://www.gatewayarch.com/buy-tickets/#u-riverboat-tickets-u. The cruise will depart from 50 S. Leonor K Sullivan Blvd, St. Louis, Mo., 63102, at the base of the Gateway Arch steps.

The work underway this week is a crucial phase of the project to replace the vital rail artery across the Mississippi River, which is one of the nation’s primary east-west rail corridors serving one of America’s largest rail hubs. The riverboat cruise is being offered as the last of three new trusses is scheduled to be installed. Those on board should be able to witness history in the making as it is floated into place. Representatives from Terminal Railroad Association of St. Louis (TRRA), which owns the bridge, and Walsh Construction, the general contractor for the project, will provide an overview of the project, its significance to the nation’s freight network, and the steps involved in placing the trusses.

The Merchants Bridge is one of two freight rail bridges spanning the Mississippi River in the St. Louis area, and this project will double the capacity on the bridge, enabling users to move their freight faster, more cost effectively and more reliably. The Merchants Bridge also serves Amtrak and is a main component of the Chicago to St. Louis high-speed rail corridor. The ability to utilize both the eastbound and westbound tracks at the same time upon completion of the project in the coming weeks will be an advantage during delays on the route, helping to increase average Amtrak speeds through the downtown St. Louis portion of the trip. Currently, only one train can cross the bridge at a time.

“This cruise will provide a unique opportunity for area residents who may be bridge enthusiasts, history buffs and current or aspiring engineers or construction workers to witness history and capture a photo of the work in progress to install the final of three trusses on the bridge,” said Mary Lamie, Executive Vice President of Multi Modal Enterprises at Bi-State Development, which operates both the Riverboats at the Gateway Arch and the St. Louis Regional Freightway as two of its enterprises.

The truss installation is a complex process that actually takes several days to complete. All the regularly scheduled cruises by the Riverboats at the Gateway Arch on Thursday, August 25, will also take passengers into the vicinity of the Merchants Bridge as part of the tour, where the captain will provide a little background on the structure, the project underway and the benefits the new Merchants Bridge will deliver. More information is available about the regular riverboat cruises at https://www.gatewayarch.com/buy-tickets/

“While it is possible the construction schedule may change in the final days leading up to the truss installation and that might impact exactly what phase of the work is occurring during the curated cruise, getting to see and learn about this landmark project from those directly involved in building the new bridge from this unique vantage point on the water will still make for a memorable experience,” said Asim Raza, Chief Legal Officer, Director of Corporate Affairs, Terminal Railroad Association of St. Louis.

The first of three new trusses was installed on the Merchants Bridge in September 2021. (Photo courtesy of Walsh Construction and Trey Cambern Photography)