The Madison County Coroner’s Office has released the identities of the two construction workers who were found deceased on Friday at a residential development in the 100 block of East Union Street. Jack M. Pfund, 19, of Edwardsville, and Cody W. Toenyes, 22, of Alton, were identified by the Madison County’s Coroner’s Office and confirmed to the Edwardsville Police Department. 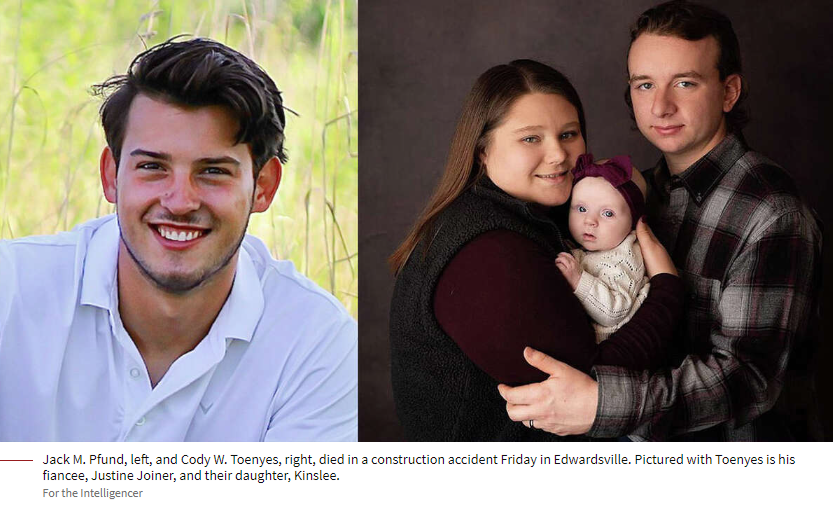 The initial statement released by the City of Edwardsville over the weekend indicated that the bodies of two construction workers who had been operating at a residential development in the 100 block of East Union Street had been recovered. The two men were found deceased in a manhole that led to storm sewer piping.

Edwardsville Police and Fire Departments responded to the scene at about 6:55 p.m. Friday, Aug. 19, 2022, for a 911 call about a person in need of rescue from a manhole. It is believed that the two workers had entered the manhole sometime in the late afternoon.

Fire Chief James Whiteford said the atmosphere where the men were located was found to contain very little oxygen and a buildup of toxic gases, as is common in confined underground spaces. The two men were nonresponsive, and rescue was attempted. Upon determining the men were deceased, the operation transitioned to a recovery effort.

The victims were recovered about 8:30 p.m. Friday.

A member of the Edwardsville Police Department who was among the first to respond was taken to a local hospital for evaluation Friday night. He was later released.

Because of the conditions in the manhole, the recovery required more advanced breathing equipment, Whiteford said.

The Edwardsville Intelligencer has further reported that Kathie Opel, of the Weinheimer Opel Law Firm, who represents the Pfunds and their company, said Monday that the family’s comment is no comment. Jack is the son of Pfund Construction CEO and President Matt Pfund and worked as an operation coordinator.

A celebration of life will be held from 4 to 7 p.m. on Thursday at the Ink House, 117 N. 2nd Street in Edwardsville. In lieu of flowers the family request memorial to Edwardsville Neighbors. Condolences may be expressed online at weberfuneralhome.com.

EDITOR’S NOTE: The Edwardsville Intelligencer contributed some of the information contained in this story, including the accompanying photo.