The Illinois Department of Employment Security (IDES) announced on Aug. 18 that the unemployment rate fell -0.1 percentage point to 4.4 percent, while nonfarm payrolls increased by +31,200 in July, based on preliminary data provided by the U.S. Bureau of Labor Statistics (BLS) and released by IDES.

The July payroll jobs estimate and unemployment rate reflects activity for the week including the 12th.

In July, the industry sectors with the largest over-the-month gains in employment include: Professional and Business Services (+10,000), Manufacturing (+6,300), and Trade, Transportation and Utilities (+5,700).

The industry sectors that reported monthly payroll declines include: Construction (-1,400) and Educational and Health Services (-1,400).

“As the statewide unemployment rate continues to drop and continued claims levels for unemployment benefits remain at historic lows, IDES encourages employers and jobseekers to utilize the Department’s robust employment services tools for reentry into the workforce,” said Deputy Governor Andy Manar. “Whether it be participating in or a hosting a job fair, training or skills building, IDES has the tools needed to assist in the growth of the expanding labor market.”

“After Illinois reached the lowest unemployment rate since the onset of the pandemic in June, it’s encouraging to see the state’s unemployment rate continue to drop while seeing continued growth in key industries,” said DCEO Director Sylvia I. Garcia. “Looking ahead, DCEO continues to focus on expanding equitable workforce training opportunities, providing incentives to companies who invest in Illinois’ workforce, and providing resources and training opportunities for job seekers.”

Compared to a year ago, nonfarm payroll employment increased by +236,600 jobs, with gains across nearly all major industries. The industry groups with the largest job increases include: Leisure and Hospitality (+61,800), Professional and Business Services (+56,700), and Trade, Transportation and Utilities (+44,600). The Mining sector (-100) was the only industry sector that reported an over-the-year decline in payroll employment. In July, total nonfarm payrolls were up +4.1 percent over the year in Illinois and up +4.2 percent in the nation.

The number of unemployed workers was down from the prior month, a -1.1 percent decrease to 287,200 and was down -27.1 percent over the same month one year ago. The labor force was almost unchanged (0.0 percent) over the month and up +2.2 percent over the year. The unemployment rate identifies those individuals who are out of work and seeking employment. An individual who exhausts or is ineligible for benefits is still reflected in the unemployment rate if they actively seek work. 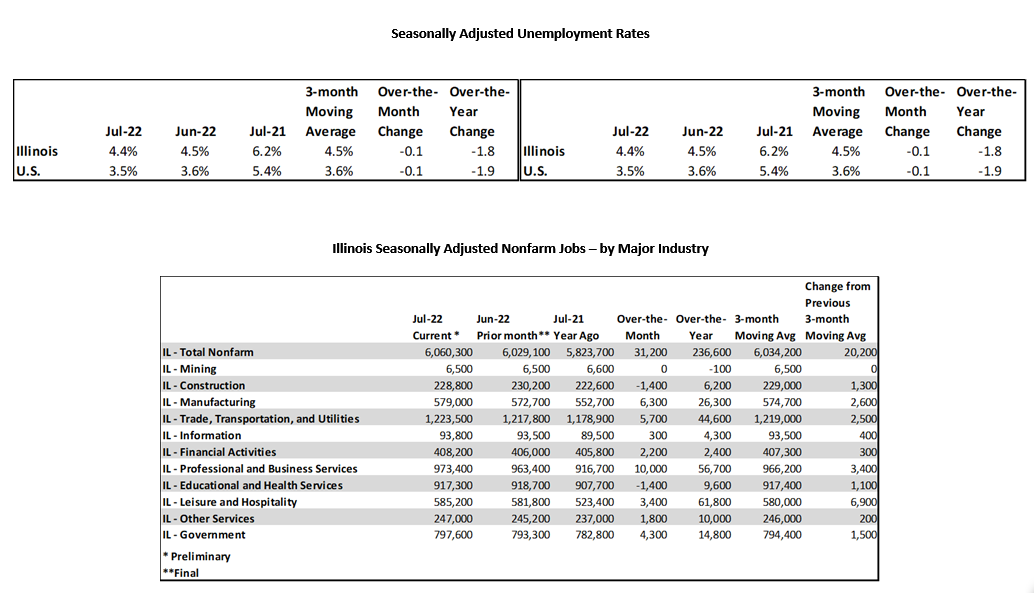