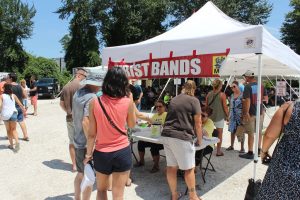 There’s little doubt that the Covid-19 pandemic fallout will continue to be felt well into the future. Its impact has left an indelible mark on all our histories, and on our futures.

But now, after nearly three years of pandemic-invoked isolation and social distancing, this summer has been the launch point for people finally coming together again.

One critical element to any public event, however, is still missing.

Mascoutah Improvement Association President Steve Heizer is one of several event organizers who have noted concerns about the future of community events being successfully hosted as they have in years past.

“What we’re seeing now with our volunteers is that most of them are older. We have many volunteers who are in their 70s and 80s working the fish stand, for example. That work is hard on the older volunteers, especially when you add in the summer heat,” Heizer added.

“It’s hard to get the younger people to volunteer and help with these events. And when they do, it’s often for an hour or two at a beverage or beer tent,” Heizer said further. “So, our older volunteers, myself included, end up working entire shifts during the event. And we do it because we were raised in a world where we learned that it was our responsibility to give back.

“But it takes its toll,” he added. “I get a total of maybe six hours of sleep all weekend during the Mascoutah Homecoming. And I’m not alone. Our event has become nearly as big as the St. Clair County Fair used to be, and I just don’t know what we can do to get more volunteers – of all ages.”

Linda Hagler, one of the organizers involved with Highland’s annual Kirchenfest hosted by St. Paul Catholic Church, agreed with the need for volunteers, and particularly from the younger generations.

Kirchenfest takes place this summer from Aug. 26 through 28. It first got its start in 1970.

“Times are changing and so are the views and values, which is very unfortunate. Their thought is they support the event by attending. Unfortunately, it takes more than that. We’re losing a lot of the older volunteers because of either age or the fear of the pandemic. Once they’re gone, I hate to say, so is the event,” Hagler added.

George Obernagel is one of the event organizers with Waterloo’s annual Homecoming, taking place on the last Saturday in August at Monroe County’s Courthouse Square. This year’s Waterloo Homecoming is on Aug. 26.

“I’m not sure if it’s the heat of the summer, the pandemic, or something else that keeps people from volunteering, or as vendors,” he added. “But it seems like Homecomings are dying.”

Two event organizers that fall into the “younger” volunteer category also shared their perspectives about this growing volunteer crisis.

Michael Ward is the tourism coordinator for the City of Jerseyville. He also personally serves as president of the nonprofit that puts together Jerseyville’s Downtown Country Christmas Festival each year. While that festival takes place in the colder month of November, on Small Business Saturday during Thanksgiving weekend, the work and the need for volunteers is year-round.

Ward has felt the pain of this generational volunteer drought, but also lives as a part of it.

“My family has been organizing and/or volunteering for years, since I was about the age of two,” Ward said. “People want the personal benefit [of volunteering] to outweigh the time used. They want the results immediately, and for most, volunteering doesn’t check that box. We also live in a digital world. Some would rather assist without the specification that they have to be personally involved.”

“A lot of the volunteers that we see come back are people who, like me, grew up doing so. Or they are people with jobs that see the benefit of being involved to make that difference. Teachers, librarians, other nonprofit leaders – they are our best go-to people,” Ward added. “In my experience, those people see the benefit of creating this opportunity and want to assist as well. They have memories that they need to see re-created or fulfilled.”

“Families are so busy these days, and it is hard for parents to volunteer and still make the rest all happen,” Ward said further. “In essence, the modern-day family is being pulled in so many directions by society, volunteering for the local nonprofit just isn’t on their radar.”

Sara McGibany, executive director of Alton Main Street, is an event organizer in the professional sense as well. Part of the “younger generation” of volunteerism, she has been organizing major events in the Alton area for well over 20 years, including the annual downtown All Wheels Drive In Car Show in June and the Alton Farmers’ and Artisans’ Markets throughout the summer season.

Her nonprofit board is entirely volunteer, and also like many others, she depends on a whole host of volunteers as well to make each hosted event a success. She shared both her personal and professional insight into how organizations might need to evolve to keep their events going.

“In the nonprofit world, one of the eternal tasks at hand is soliciting donations,” said McGibany. “Whether an organization is seeking financial contributions or asking volunteers to give their time and talent, a line must be walked to exhibit confidence that a project has enough support to be successful while also conveying the message that assistance from the community is needed to see it through.”

McGibany explained that Alton Main Street keeps its volunteers engaged by coordinating events and projects that are relevant to them, and by inviting the community to guide the process along. “To attract volunteers from the next generation, organizations need to present events which contribute to the lifestyle that younger people envision for the city they have chosen to live in.

“Occasionally that means letting go of traditions that are no longer serving the collective vision for your community or recognizing that a certain type of event has become oversaturated in your area. Reinventing aspects of your events and adding elements where there is a surge in popularity are great ways to breathe new life into existing projects in order to reach a younger segment of the population,” McGibany added.

“With each passing year, it becomes more apparent that civic organizations are playing less of a role in how people socialize, but in an increasingly digital landscape, the value of personal connections cannot be overstated. A noticeable shift is that mass emails and blanket social media posts declaring that your organization needs help are becoming much less effective. Building a team where volunteers feel an ongoing commitment to the mission while developing relationships with one another is crucial to success,” McGibany said further.

“When organizers take the time to identify volunteers who are really enjoying their experience, and personally ask them to recommit in subsequent years, they will typically jump at the opportunity to make a difference. Getting to know your volunteers and learning what drives them to participate is very important. Individuals are motivated by different things.”

All of this funnels down to the next generation of organizers as food for thought if not a call to action, as those last lemon shake-ups are served and the summer festival season begins to cool down.

This story is also featured in the August 2022 print edition of the Illinois Business Journal.