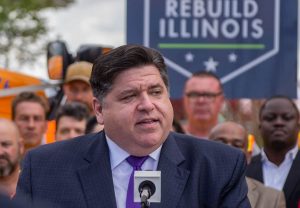 Governor JB Pritzker joined the Illinois Department of Transportation (IDOT) today to announce a $34.6 billion program to improve roads, bridges, transit, rail, airports, and ports over the next six years. This funding represents a robust commitment to invest in people and communities backed by the historic Rebuild Illinois capital program.

“Since I signed our historic, bipartisan infrastructure program into law, Rebuild Illinois has undertaken a massive transformation of our state’s transportation systems,” said Governor JB Pritzker. “And today, I am proud to announce IDOT’s new Multi-Year Program for the next six years — with $20 billion going towards transportation investments including 2,500 miles of roads and nearly 10 million square feet of bridge deck and $10 billion going towards our state’s rail and transit systems, airports, and ports. At its very core, Rebuild Illinois and this MYP are an investment in our future — one that leads to economic prosperity and environmental sustainability.”

Of the major elements in the program released today, $6.36 billion will go toward highway reconstruction and preservation, $6.4 billion for bridge improvements, $2.03 billion for strategic expansion, $2.48 billion for system support such as engineering and land acquisition, and $1.55 billion for safety and system modernizations.

For the first time, road projects that add capacity were evaluated by a new Data-Driven Decisions Tool supported by Gov. Pritzker for selecting critical projects to ensure greater equity and transparency in transportation planning and programming. The FY2023-28 Proposed Highway Improvement Program aims to improve 2,562 miles of roads and nearly 10 million square feet of bridge deck. Of the $24.6 billion over the six years of the highway portion of program, $3.7 billion is identified for the current fiscal year. Included in the program are scores of projects in each of IDOT’s nine highway districts.

With last year’s passage of the federal Infrastructure Investment & Jobs Act, IDOT increased the investment in Illinois roads and bridges in the six-year program by $4 billion, further advancing Gov. Pritzker’s goals to create economic opportunity and jobs, promote quality of life, and improve safety on both state and local transportation systems throughout Illinois. The 2019 Rebuild Illinois capital plan’s framework and investments ideally positioned Illinois, the country’s transportation hub, to take advantage of the increased federal commitment and leverage additional funding which will help rebuild the state’s infrastructure more quickly and efficiently. The new federal transportation package is expected to contribute almost $16 billion across all modes of Illinois transportation, with the state eligible to compete for billions more in discretionary programs.

In addition to the six-year program for roads and bridges, Gov. Pritzker also released the FY2023-28 Proposed Multimodal Multi-Year Improvement Program further demonstrating the commitment through Rebuild Illinois to build connections across the modes of transportation and strengthen the state’s entire transportation network, resulting in even more economic activity and job creation. The program identifies a combined federal, state, and local investment of $6.5 billion for transit, $2.5 billion for passenger and freight rail, $817 million for aviation, and $150 million for ports.

“These investments in our roads, highways and bridges will create good-paying jobs, stimulate economic growth and connect our communities,” said State Senator Doris Turner (D-Springfield). “I am excited to see these vital improvements revitalize Illinois’ infrastructure and provide working families safe transportation systems to drive to work and visit loved ones.”

“With this investment, Illinois is working toward its commitment to delivering equitable, data-driven solutions to our transportation and infrastructure needs,” said State Senator Ram Villivalam (D-Chicago), chair of the Senate Transportation Committee. “Coupled with federal funding, we will improve our infrastructure to ensure safety, accessibility, and responsible economic and environmental impact.”

“From roads and bridges to airports and rails, an investment in the transportation infrastructure of Illinois is an investment in the safety and economic prosperity of our communities,” said state Rep. Sue Scherer (D-Decatur). “I look forward to seeing the six-year highway and multimodal improvement plans become reality and I thank Gov. Pritzker and IDOT for their support of these important projects.”

“This multibillion-dollar program will create jobs, revitalize communities and promote efficiency within our transportation systems, undoubtedly benefiting the lives of all Illinois residents,” said state Rep. Marty Moylan (D-Des Plaines). “The projects in all of IDOT’s highway districts will ensure that the benefits of this program are seen across the state.”

“Illinois’ infrastructure must be maintained and improved for the safety of our citizens from the back roads and bridges of Southern Illinois to the busy streets of the City of Chicago,” said State Rep. Marcus C. Evans (D-Chicago). “Through the many challenges of our current times, Governor Pritzker has had a real laser-focused plan to substantially improve Illinois’ infrastructure in the next several years. I thank Governor Pritzker for his exceptional leadership and have all confidence in our Illinois Department of Transportation (IDOT) to efficiently deliver the quality and reliable results that the citizens of Illinois deserve.”

“This blueprint for investing in Illinois transportation is perhaps the most consequential in the history of IDOT due to the increased federal commitment and Gov. Pritzker’s ongoing leadership through Rebuild Illinois,” said Illinois Transportation Secretary Omer Osman. “We look forward to working with our partners and stakeholders, delivering these important projects in communities up and down our state.”

Passed in 2019, Rebuild Illinois is investing a total $33.2 billion into the state’s transportation system over six years, creating jobs and promoting economic growth. Rebuild Illinois is not only the largest capital program in state history, but also the first plan that touches all modes of Illinois transportation: roads and bridges, transit, waterways, freight and passenger rail, aviation, and bicycle and pedestrian accommodations.

Entering year four of Rebuild Illinois, IDOT has made approximately $8.6 billion in improvements statewide on 4,422 miles of highway, 412 bridges, and 621 additional safety improvements.