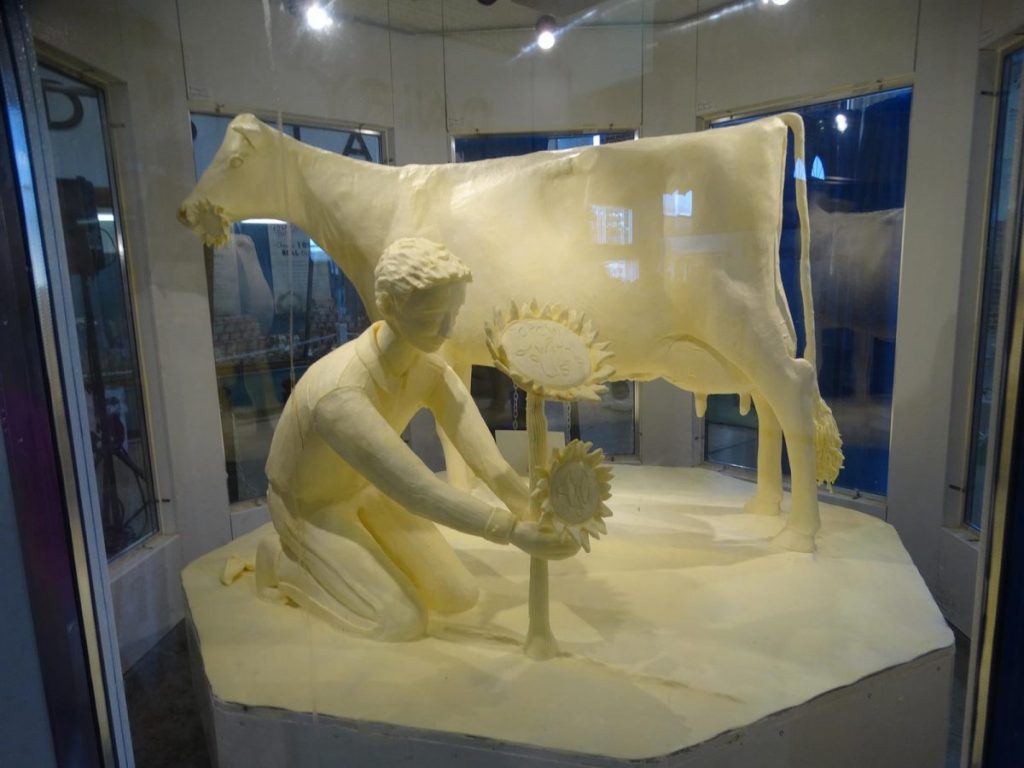 The sculpture – by Iowan Sarah Pratt – consists of more than 800 pounds of recycled butter in the shape of a cow munching on a sunflower. It also pictures a farmer tending the land and growing sunflowers, one of which was eaten by the cow. “Recycled” means that the same butter is used for the fair cow for 10 years before being rotated out.

It’s a nod to the state’s agriculture industry as well as $58.1 million in construction that is planned at the fairgrounds, according to Illinois Department of Agriculture Director Jerry Costello II. The renovations are funded by the state’s Rebuild Illinois capital infrastructure program, approved on bipartisan lines in 2019.

Pritzker, at the unveiling Wednesday, said the theme for the year was fitting for Illinois, pointing to job growth and infrastructure investment.

Rebecca Clark, who was named the new fair manager this year, said the theme also touches on the fair’s agricultural roots.

“That theme is really indicative in so many ways out here on the fairgrounds, from the improvements that you see on the grounds to the youth exhibitors that show year after year in our celebrated barns,” Clark said.

This year’s fair will include new exhibits, such as a Giant Dinosaurs display created by Dino Don Inc., the world’s leading supplier of robotic dinosaurs to zoos and museums.
Grandstand attractions, among others, include pop star Demi Lovato on Saturday, Aug. 13, country duo Brooks & Dunn on Sunday, Aug. 14, country star Willie Nelson & Family on Tuesday, Aug. 16, and comedian Trevor Noah on Friday, Aug. 19.

The Department of Innovation and Technology will host its second annual Science, Technology, Engineering, Arts and Mathematics Expo from Aug. 17-21, complete with e-sports competitions, drone racing and interactive exhibits. Fairgoers will also be able to take home a 3D-printed miniature butter cow from the STEAM tent.

The butter cow sculpture will remain on display in the Dairy Building throughout the fair and is viewable live via the butter cow webcam.

As for infrastructure investment, Pritzker and Costello said its noticeable from the roads to the rooftops on the fairgrounds.

“Probably one of the things most people will really notice are the roads. If you look at the roads by the cattle barn, by the swine barn, if you look at Eighth Street, if you look at the avenue of flags, those are things that are really going to stick out,” Costello said of $4.1 million of construction on fairgrounds roads.

The 122-year-old coliseum at the fairgrounds saw renovations for its structural integrity in 2019, while Phase 2 construction at the facility is set to begin when the fair concludes this year. The $16.3 million in planned renovations include electrical and plumbing work, an elevator and adding an HVAC system.

Costello said the HVAC system will allow for year-round use of the coliseum, which could mean an expansion of dog shows or other events. In 2025, the fairgrounds will host the World Clydesdale Show.

Clark said fair organizers are working with the Community Foundation of the Land of Lincoln on a long-term plan to “really help explore what the future of this fairgrounds will look like.”

The multi-purpose arena at the fairgrounds will be temporarily closed this year, but it’s also on the list of makeover projects. The 261,000 square foot arena was constructed in 2000.

Other renovations included roof and HVAC replacements in various buildings, as well as energy improvements and tuckpoint work.