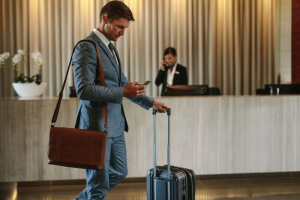 A battered hotel industry is enjoying summer travel, but business travel, the industry’s big money-maker, is still reticent to book.

Leisure travel came roaring back this year as pent-up demand sent a surge of travelers onto the road and into various lodging across Illinois. June saw hotel occupancy hit 72 percent, 2 percent higher than the national occupancy rate, WIFR reported.

Illinois Hotel and Lodging Association president and CEO Michael Jacobson says the industry is doing far better than they were a year ago. While not at pre-pandemic levels yet, it gets closer every passing month.

Business travel still lags, however, according to Jacobson.

“You’re still not seeing companies put their employees back on the road at the degree they did before the pandemic,” he said.

Jacobson says people are going to get back to traveling for business, it’s just going to take a little longer.

“We’re really working with businesses to make them realize you can’t make a big sale over Zoom, or you can’t train a new group of employees over Microsoft Teams,” he said. “Those technologies are here to stay, don’t get me wrong, and they filled a big void during the pandemic, but in many cases to make that client sale, you need to be there to shake their hand, you need to be on a tradeshow floor to feel the product if you’re going to purchase a product.”

Hotels’ biggest hurdle now is staffing, as thousands of positions remain open across the state, Jacobson noted. He wants people to rethink their preconceptions about what a career in the hotel industry looks like.

“We have a job really for everybody that also provides a good living, a great wage, good benefits and a lot of flexibility as well, so we’re trying to get the message out there,” he said.

Other headwinds facing the industry include inflation, gas prices, persistent staffing shortages and the looming potential for a full-blown recession, says Jacobson.

“There are some headwinds still ahead of us that pose some challenges and some potential risks, but we’re confident that, by 2024, we’ll fully be back to normal,” he said.

Until then, he believes leisure travel will continue to be strong, although maybe not at the frenzied levels directly following the pandemic.

“Even though that pent up demand won’t stay as high as it was right when the pandemic started quieting down, people still realize now how important traveling is to their own personal wellbeing and their families’ wellbeing,” Jacobson said.