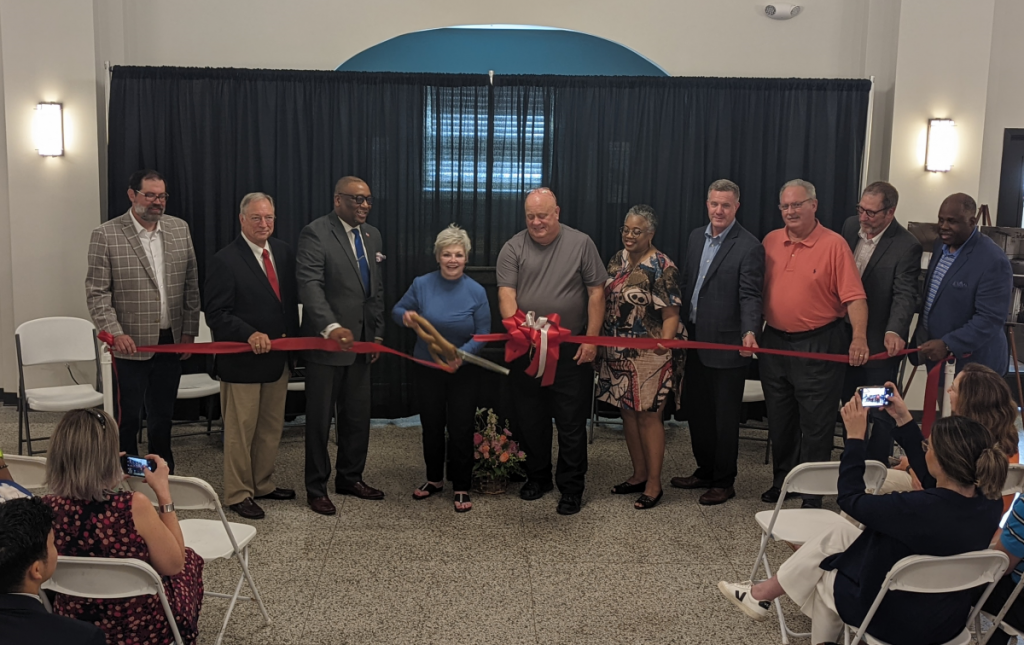 Southwestern Illinois Development Authority (SWIDA) and Bywater Development Group joined with other key stakeholders and guests in July for a much-anticipated grand opening event to celebrate the successful completion and full-lease up of Lofts on the Square in downtown Belleville, Ill.

“The hard work and collaboration of the entire development team and support from our city leaders and a congressional delegation were integral to delivering this meaningful project,” said SWIDA Chairman David Willey. “The future of this building was uncertain for a long time, and we are proud to be bringing new vitality to Downtown Belleville through the revitalization of this historically significant space that is once again a focal point of our city.”

Located at 16 S. Illinois Street in Belleville, this building has a rich history, originally opening in 1931 as the Hotel Belleville. It was renovated in the early 1960s and converted into a residential community for seniors known as the Meredith Home.

Prior to being acquired by SWIDA and Bywater Development from the City of Belleville for $600,000, the building had been vacant for more than 10 years and at one time was slated for demolition.

It has instead been given new life thanks to the diligent efforts of developers and the enthusiasm the community has shown towards the reuse of a place with great historical significance. The building earned a place on the National Register of Historic Places in 2018 as a prime example of the Art Deco architecture style, making it eligible for federal and state historic tax credits.

Holland Construction Services served as the general contractor for the renovation project, which involved completely updating the building’s systems, and the restoration of many of the building’s unique architectural characteristics while incorporating several sustainable design elements.

The completed project is providing quality affordable housing opportunities for those 55 and older who meet income requirements and are seeking an independent lifestyle. The six-story building is comprised of 47 units of studio, one- and two-bedroom apartments on floors two through six, and includes more than 3,000 feet of street-level commercial space available for lease by retailers and restaurants.

A common room, library, computer lab, exercise room and storage facilities are among the modern amenities included in the newly renovated building. The location provides residents with convenient access to local businesses and leisure activities in the area surrounding the Public Square.

SWIDA and Bywater secured the financing for the project from a variety of sources, including $930,792 in affordable tax credits through Illinois Housing Development Authority (IHDA); $2,320,136 in federal historic tax credits through the National Park Service, and $2,290,905 in Illinois state historic tax credits through the Illinois State Historic Preservation Office. These three tax credit allocations generated approximately $12.5 million in equity investment from PNC Bank. The funding was rounded out by a $1.3 million loan from IHDA’s HOME Program funds and $472,000 in developer loans secured by SWIDA and Bywater.

“This project challenged us in good ways. Due to the collaborative efforts of the entire team, the support of our financing partners, and the encouragement from the community, the project was completed according to the highest standards,” said David Dodson, CEO of Bywater Development Group. “The team’s ability to communicate effectively and think creatively ensured the success of the project, and we are thrilled to finally be celebrating that success.”

Lofts on the Square officially opened in the fall of 2021. The COVID-delayed grand opening event featured brief remarks, light refreshments and a ceremonial ribbon cutting to mark the successful completion of this landmark project. An additional highlight of the event was a special presentation to the family of former SWIDA Chairman Jim Nations, who had played a key role in advancing this development but passed away in September 2020, almost a year before seeing the project’s completion.