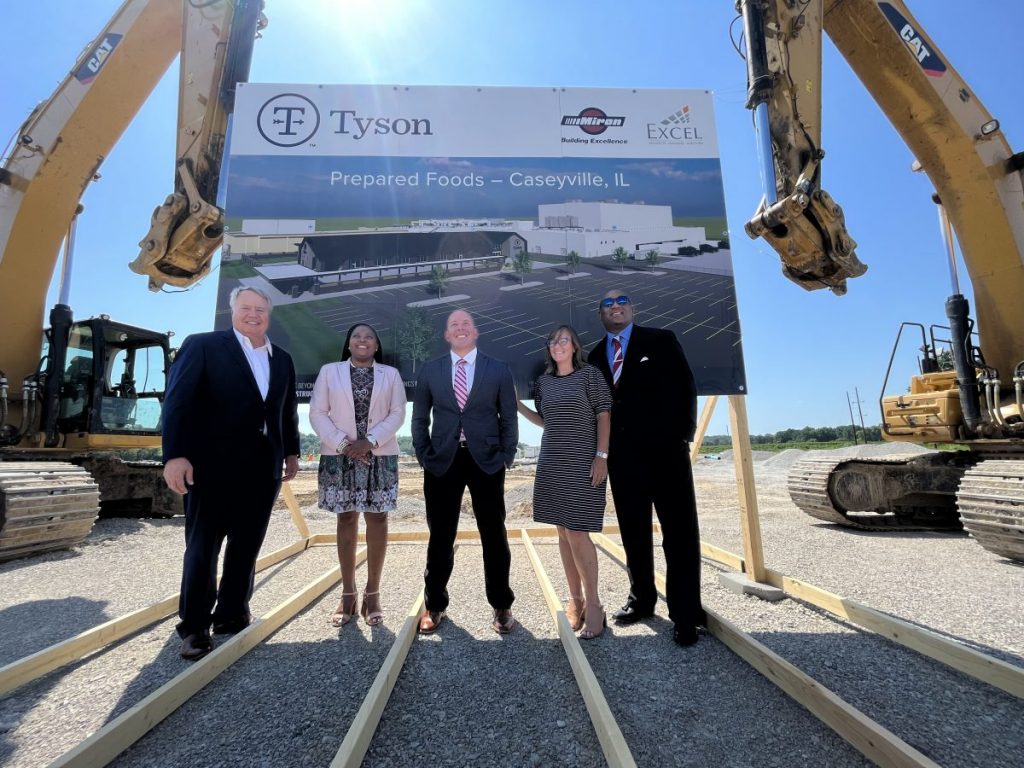 Governor JB Pritzker joined Tyson Foods, Inc., as well as state and local officials, to announce a new expansion of Tyson’s Caseyville facility, which will expand the production of Hillshire Farm® and Jimmy Dean® products. The company’s commitment to expand its Caseyville facility is expected to bring a $180 million investment and create 250 new jobs – generating economic benefit for the region and state. The new facility is expected to be complete in the summer of 2023.

“I am thrilled to celebrate the expansion of Tyson Foods’ Caseyville facility thanks to our EDGE credit program,” said Governor JB Pritzker. “Tyson will be expanding their regional footprint by 170,000 square feet and over 250 new jobs with a total investment of $180 million in this community. Tyson’s decision to expand in Illinois speaks to our strengths in manufacturing, our world-class infrastructure, and our abundant — and highly talented — workforce.”

“We’re thrilled to celebrate the expansion of our Caseyville prepared foods plant, creating new job opportunities for those in the community and keeping workplace ease and efficiency in mind for our current team members,” said Noelle O’Mara, Group President, Prepared Foods, Tyson Foods. “With automated warehousing and robotics at the heart of the project, we’re looking forward to its full completion.”

This builds on a significant economic impact generated annually by the company – with nearly $933 million in output in Illinois alone, over 4,000 current full-time staff in Illinois, and more than 293 staff in Caseyville.

“Tyson’s expansion in Caseyville will create at least 220 new jobs which will benefit the community and the entire Metro East region,” said DCEO Director Sylvia I. Garcia. “Tyson’s decision to expand operations here in Illinois further solidifies our state’s reputation as a top food manufacturing powerhouse.”

As part of the expansion, the company received an Economic Development for a Growing Economy (EDGE) tax credit, which stipulates a goal of investing $130 million and creating 220 jobs over the next two years. All executed EDGE agreements can be found here.

Employing more than a half a million Illinoisans with $106.7 billion annual output, manufacturing represents a significant portion of Illinois’ economy. To support the continued growth of manufacturing companies in Illinois today and for the future, the Pritzker administration has taken several actions to invest in its workforce, with new training in high growth industries, and the development of new business development tools, including the apprenticeship tax credit, which encourages investment in high tech job training.

State Rep. Jay Hoffman (D-Swansea) joined Governor Pritzker and area leaders to celebrate the expansion of Caseyville’s Tyson Foods plant. “This expansion project is a boon for our region,” Hoffman said. “It’s going to create construction jobs, permanent jobs at the plant, as well as spur increased economic development for our area. It’s a reflection of the work we’ve done in Springfield and locally to support Illinois businesses and the job creation that comes with it.”

The $180 million expansion project is expected to be completed in the summer of 2023, with new lines beginning production this fall. Food items produced at the plant include Hillshire Farm and Jimmy Dean branded products, which have been in growing demand.