With the highest unemployment rate in the Midwest and 117,000 jobs still missing, Illinois’ labor market is among the least recovered in the region

Illinois is still missing 117,000 jobs compared to before the pandemic, which is 1 in 7 jobs lost at the onset of the COVID-19 downturn and state-mandated lockdowns.

Only Wisconsin is worse among Illinois’ neighbors, new data from the U.S. Bureau of Labor Statistics shows. 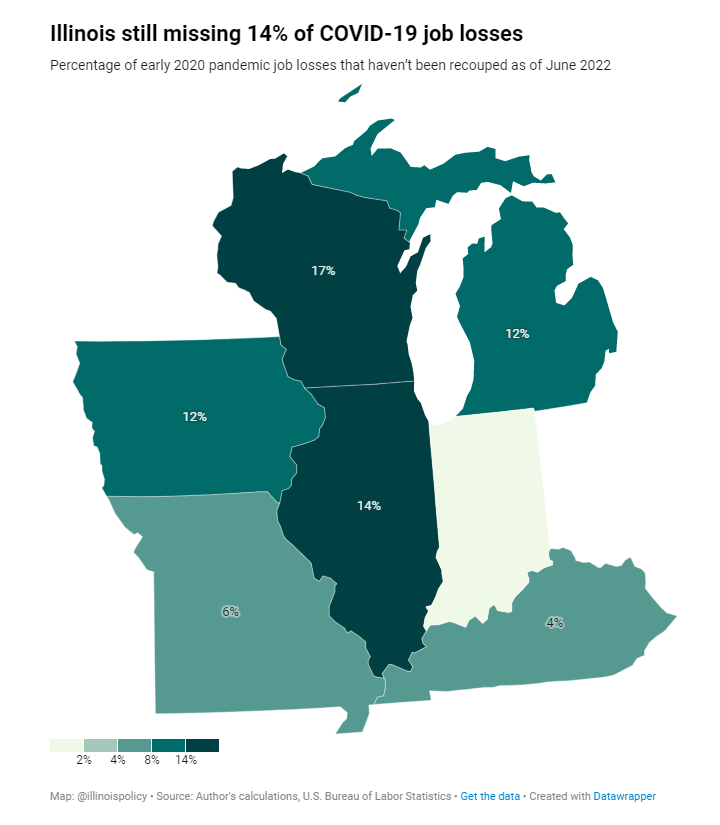 Indiana has fully recovered from its pandemic-related job losses, having grown payrolls by 17,600 jobs relative to the pre-pandemic peak. And while no other neighbor state has surpassed their early 2020 employment levels, Kentucky and Missouri are on the verge of a full recovery, with only 4 percent and 6 percent of their COVID job losses still missing. Michigan and Iowa are also doing better than Illinois, missing just 12 percent of the jobs lost in early 2020. The only state whose recovery is lagging more than Illinois’ is Wisconsin, which is still missing 17 percent of the jobs lost at the onset of the pandemic.

The results are particularly bad as 16 states have fully recovered from their early 2020 job losses. Utah and Idaho, the states whose job markets are most recovered from the COVID-19 pandemic, have grown payrolls by 5.7 percent each relative to their 2020 peaks. Nationally, payrolls are only 524,000 below pre-pandemic levels, with the nation still only missing 4 percent of the jobs lost at the onset of the pandemic.

Many experts are concerned the nation is on the brink of – or may already be in – a recession. If true, Illinoisans could be in for a particularly tough downturn because job openings are falling most rapidly here and the state is already battling the highest unemployment rate in the Midwest.

The Federal Reserve recently announced plans to hike interest rates for the fourth time this year in an effort to combat rampant inflation. Despite rising interest rates, inflation has continued to remain higher than expected – up 9.1 percent from a year ago. The national economy shrank by 0.9 percent during the second quarter of 2022, according to preliminary data released July 28 by the U.S. Bureau of Economic Analysis. That is traditionally a key indicator of a recession. The combination of these factors is bad for future economic prospects. The U.S. labor market might not be able to sustain its recovery because of these challenges.

However, Illinois could still be more susceptible to a potential economic downturn as businesses and residents flee. Three major corporations – Boeing, Caterpillar and Citadel – all announced in the past two months they would be relocating company headquarters out of Illinois. And a record exodus driving population decline threatens to prevent the state’s economy from ever returning to pre-pandemic employment levels.

The first step to ensure Illinoisans don’t endure a particularly painful future will be for voters to take a hard look at Amendment 1 on the Nov. 8 ballot. Amendment 1 would change the Illinois Constitution to grant public sector unions in Illinois more extreme powers than they have in any other state, including the ability to bargain over virtually limitless subjects, the ability to override state law through their contracts and a guarantee taxpayers and lawmakers would have an extremely difficult time reversing course.

Should Amendment 1 pass, Illinois’ $313 billion pension debt would continue to balloon as state and local taxes, which are already among the highest in the nation, rise in an attempt to keep up. Spending on vital programs would continue to fall. Illinois’ housing and labor markets are already suffering as high taxes and reduced services make finding a job and living in the state tenuous. These problems would be exacerbated should the U.S. enter a prolonged recession.

Illinois needs reform that will control the state’s cost drivers and deliver vital support to taxpayers when they need it the most. Amendment 1 ensures those challenges worsen during periods of economic distress.

Bryce Hill is the director of fiscal and economic research with the Illinois Policy Institute, where Thomas Erie is currently a policy intern.