The RBGA led a ribbon-cutting ceremony on July 11 at the re-opening of the McDonald’s Restaurant in downtown Alton that also included remarks from Alton Mayor David Goins. This dining location is one of those owned by Dick and Suzi Bold of Bold Enterprises and operating in Alton, Bethalto, Godfrey, Edwardsville and Hamel. 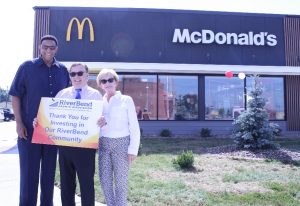 The Alton location at 717 E. Broadway re-opened on July 8, just over a year after a fire that started in its roof destroyed the previous structure in June 2021. Total construction costs for the new facility were roughly $2.3 million.

Updates were made to the interior design as part of the new construction, most notably the lack of a self-serve beverage dispenser. Customers now experience the drink being dispensed automatically right in front of them. The cup will drop down, fill with ice and the chosen beverage, at the order counter as they place their order.

An updated sprinkler system and smoke alarms on the roof were also important parts of the new construction design. The new alarm system directly connects with the Alton Fire Department.

Dick Bold recently talked about the reopening of the Broadway location in Alton during an interview with Mark Ellebracht at WBGZ Radio. During the interview, Bold shared that he has been with McDonald’s for 48 years, with 28 of those spent as an owner.

Bold said that employees of Alton’s Broadway McDonald’s were shifted to other Bold-owned locations after the fire, and many have now returned to the Broadway location since its rebuild and reopening. “I couldn’t wait to rebuild because the community has been so good to us,” Bold further noted.

Another RBGA-led ribbon-cutting celebration was held on July 22 at the grand opening of the local Joe’s Pizza and Pasta owners’ third location in East Alton. 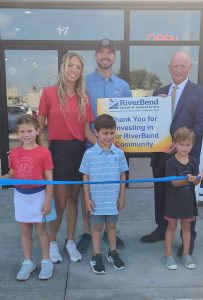 Owners Corey and Kayla McMahon were joined by a gathering of roughly 35 others to celebrate this expansion of their restaurant line. Guest speakers during the event included the East Alton Mayor Darren Carlton and Alton Mayor David Goins, along with state Senator Kris Tharp (D-Bethalto). The celebration also featured complimentary food and drinks, live music, and a bounce house for the kids to enjoy.

The McMahons own locations in Godfrey and Edwardsville in addition to this newly opened location in East Alton at 17 Eastgate Plaza. They plan to open a fourth location soon in Mascoutah, Ill. The Edwardsville location was their first, opening in February 2010. The Godfrey location followed in July 2017, with the East Alton location opening earlier this year in April.

Corey McMahon further noted, “This year, we are celebrating 50 years of Joe’s Pizza. The first restaurant opened in 1972 as Joe’s Pizza in Olney, Ill. There are now 18 locations.”

For more information, to view their menu, or to order online, readers can visit online at ILoveJoesPizza.com. Reach out by email to joesedwardsville@gmail.com with any further questions.

The RBGA offers ribbon cuttings to new businesses and milestone anniversary celebrations as one of its many member benefits.

To learn more about membership in the RiverBend Growth Association, visit the RBGA website at growthassociation.com or contact Stefanie Withers at (618) 467-2284.