For their first time in at least 20 years, millions of Illinois voters will see something new on their general election ballots: choices about who will represent them in the Statehouse.

According to the Illinois Policy Institute, 82 Illinois House of Representatives races will have both a Republican and a Democratic candidate on the Nov. 8 ballot. During the past two decades, nearly half of Illinois’ 118 House races went uncontested.

Of the candidates on the ballot, Illinois Policy, the institute’s advocacy partner, recruited 34 House candidates and four Senate candidates.

An analysis of the 2022 ballot shows: 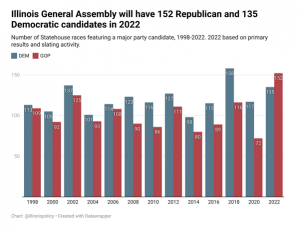 This year marks the first time there are more Republican candidates on the ballot than Democratic candidates since at least 1998.

“For years, Illinois’ legislative maps and candidacy systems have been broken, leaving voters feeling hopeless and exhausted that their vote didn’t count,” said Matt Paprocki, president of the Illinois Policy Institute. “This year disrupted that trend. Millions will now benefit from seeing a choice. Two or more candidates should be the standard for all political races.”