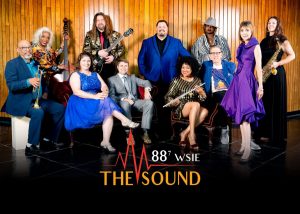 WSIE 88.7 The Sound, Southern Illinois University Edwardsville’s 50,000-watt radio station for more than 50 years, is enjoying a resurgence in the St. Louis region thanks in large part to its unique blend of stress-free music.

“WSIE 88.7 The Sound is a radio station with wide appeal,” said Jason Church, general manager of WSIE. “We offer a jazz-centric mix of music. Imagine going from Miles Davis to Boney James, Jamiroquai, Eric Clapton, George Benson, The Four Tops, David Sanborn, Steely Dan and Aretha Franklin. If it has been a while since you last tuned in, or if you have never tuned in before, I encourage you to check out WSIE 88.7.”

Over the past year, WSIE has enjoyed a major increase in listenership, thanks to its eclectic musical offerings and an ever-growing base of consumers who seek non-offensive, music-centric outlets. To remain focused on music, WSIE does not air news, weather or traffic.

WSIE 88.7 is the only 24/7 FM radio station in the region that features a unique blend of jazz, smooth jazz, blues, and easy R&B. The station also features the music of regional jazz and jazz-related acts at least one to two times per hour. WSIE has been gaining national exposure as the moderator for last year’s Miles Davis Art Festival. Church was also nominated to be a judge for the inaugural Jazz Music Awards, which will premiere in October 2022.

The station’s increasing popularity is being reflected by an increase in the number and type of underwriters’ spots on air. Along with many long-term connections, like Jazz St. Louis and the Sheldon, WSIE has recently added Carol House Furniture, the St. Louis Science Center, Woods Basement Systems, the St. Louis Art Museum, and the Kranzberg Arts Foundation to its growing list of underwriting partners.

WSIE has been operating on limited paid staff for years and depends heavily on volunteers, including SIUE students and professional community broadcasters. WSIE volunteers learn valuable hands-on skills pertinent to the broadcast industry. Two current SIUE seniors have recently accepted part-time positions with Hubbard Radio St. Louis, thanks to their experience with WSIE.

WSIE is available anytime at 88.7 FM in the St. Louis region, WSIE.com online, or via the TuneIn or Riverbender.com Radio app on your smart device. To learn more about the station, how you can make a tax-deductible donation, or how your business can become an underwriter, visit WSIE.com.