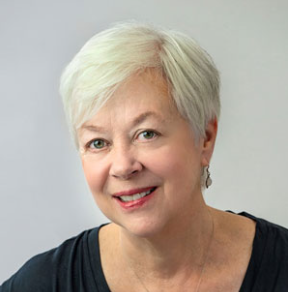 Southern Illinois University Edwardsville’s Allison Funk, professor emerita in the College of Arts and Sciences’ Department of English Language and Literature, has joined an illustrious list of 180 outstanding scientists, writers, scholars and artists who have been appointed out of nearly 2,500 applicants as 2022 Guggenheim Fellows. The recipients were selected by the John Simon Guggenheim Memorial Foundation on the basis of prior achievement and exceptional promise to further develop their work.

“My project is a seventh book of poems titled, ‘Wetland: New and Selected Poems’,” Funk said. “As a ‘new and selected’ collection, the book will include a section of new poems as well as selections from my previous six books. The ‘new’ section will include poems written in the aftermath of my husband’s death in February 2020.”

“I have come to associate my grief with a local wetland that has been a site of contemplation for me since my husband’s passing, a personal refuge, as well as a protected space: the Watershed Nature Center in Edwardsville. For some time, I walked there weekly, observing the lifecycles of plants, as well as the birds and animals that the preserve supports. Poems influenced by that place will form the heart of the new section of Wetland.”

An award-winning and widely-published poet with more than five books of poems to her name, Funk accepted the Fellowship in person at the Century Association in Midtown Manhattan in June.

“It was a lovely event that included this year’s Guggenheim Fellows and some from earlier years,” she shared. “I particularly enjoyed talking with other individuals who had received fellowships in the arts: poets, filmmakers, painters and biographers, among others.”

In his remarks on this year’s Fellowship and the funding it entails, Edward Hirsch, president of the Guggenheim Foundation and 1985 Fellow in poetry, said, “Our long experience tells us what an impact these annual grants will have to change people’s lives. The work supported by the Foundation will aid in our collective effort to better understand the new world we’re in, where we’ve come from, and where we’re going. It is an honor for the Foundation to help the Fellows carry out their visionary work.”

Funk believes the Fellowship recognizes the merit of her new book and acknowledges her life’s work after more than 40 years of writing. Financial support through fellowships and awards has helped sustain her career as a poet, even after she started teaching at SIUE in 1990.

Having served as a distinguished professor of English at SIUE prior to her retirement, Funk credits her success in applying for the Fellowship to the university. “I can’t imagine I would have won the Guggenheim if I hadn’t received support from the English department, the College of Arts and Sciences, and the Graduate School throughout the time I taught at SIUE. Those units made it possible for me to grow as a writer in a number of ways – by granting me sabbaticals and University awards, as well as supporting travel to places like Scotland and France, where I spent time developing my art.”

When asked whether she might be publishing her most important work under the Fellowship, Funk said, “My goodness! I have no idea. I certainly hope that I’m becoming a stronger and stronger writer all the time. The publication of a collection of ‘new and selected poems’ usually occurs when a poet is in the middle or late phase of her career. I hope it’s not too ‘late’ for me to do my best work.”

To her, a poet is someone who devotes themselves to practicing the art of poetry over the long haul, someone who loves the written word and remains passionate about literature through days and years of constant reading, writing and revision.

Though born in Princeton, N.J., Funk grew up in Delaware and obtained her bachelor’s in English and MFA in creative writing from Ohio Wesleyan University and Columbia University, respectively.

Since its establishment, the Guggenheim Foundation has granted nearly $400 million in Fellowships to over 18,000 individuals, among whom are more than 125 Nobel laureates, members of all the national academies, winners of the Pulitzer Prize, Fields Medal, Turing Award, Bancroft Prize, National Book Award, and other internationally recognized honors. The great range of fields of study is a unique characteristic of the Fellowship program. In all, 51 scholarly disciplines and artistic fields, 81 different academic institutions, 31 states and the District of Columbia, and four Canadian provinces are represented in this year’s class of Fellows, who range in age from 33 to 75.

Allison Funk, professor emerita in the SIUE College of Arts and Sciences’ Department of English Language and Literature, shown.