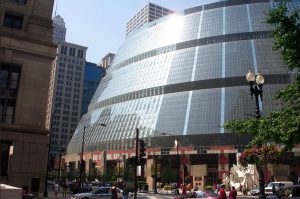 Completing a sale that has eluded the State government for decades, Governor JB Pritzker and the Illinois Department of Central Management Services (CMS) announced today the final closing of the James R. Thompson Center at 100 West Randolph Street and the transfer of property title to JRTC Holdings, LLC. Google will become the building’s new occupant, establishing its presence in the Central Loop. Google and JRTC Holdings, LLC have entered into a build-to-suit agreement for the redevelopment of the building, which Google intends to occupy upon completion of the renovation.

Under the announced deal, the State will receive an amount equal to $105 million for the purchase of the entire JRTC, comprising $30 million in cash and title to the property located at 115 S. LaSalle, which both parties agree has a value of $75 million. The deal furthers the State’s broader real estate alignment, allowing the State to consolidate additional downtown leases, which will save Illinois taxpayers nearly a billion dollars over the next thirty years.

“This transformative agreement will save our taxpayers nearly a billion dollars over the next thirty years – and further Chicago’s reputation as one of the great tech hubs not just of the United States, but of the world,” said Governor JB Pritzker. “I want to thank Google and the Prime Group for investing in their future by investing in ours. Together, we are bringing a 21st-century vision for the LaSalle Street corridor to life.”

“The Thompson Center gives us a presence in the central business district, enabling us to get in on the ground floor of revitalizing the Loop with its unparalleled access to public transit, which is so important to today’s hybrid workforce,” said Karen Sauder, President of Global Clients and Agency Solutions and Site Lead of Google in Chicago. “This will help our business, our product development and create a great environment for our employees. We’re proud to continue being an active part of Chicago’s diverse and vibrant community.”

In December 2021, the State announced the selection of JRTC Holdings, LLC as the purchaser of the building, following the competitive Request for Proposal process. As part of the original proposal, the State would have received a $70 million up-front payment for the purchase of the property while retaining approximately 425,000 sq ft of newly renovated, Class-A office space at the JRTC and contributing $148 million for its share of the renovations.

Under the new agreement, the State will receive an amount equal to $105 million with no additional obligations related to the purchase of office space in the renovated JRTC. The cash portion, $30 million will be deposited into State’s General Revolving Funds to meet the statute requirements. Renovations to the interior and exterior of the 115 S. LaSalle building will require significantly less investment from the State than the proposed $148 million in renovations at JRTC.

The 37-story building was designed by Chicago architecture group Skidmore, Ownings, and Merrill and opened in 1974. The building was recently occupied by BMO Harris Bank and designated as its headquarters. The Harris Bank building is part of a complex that is comprised of three buildings, and the State will be the sole owner of the West building, which contains 591,845 usable square feet of space. JRTC Holdings, LLC will own the two buildings sharing the address of 111 W. Monroe to the east of the 115 S. LaSalle building. The State intends to relocate its workforce of nearly 1,800 employees currently located at the JRTC and several private Loop leases and their operations to 115 S. LaSalle, as it already relocated over 2,000 employees to 555 W. Monroe building and nearby public buildings.

JRTC Holdings, LLC will perform the renovations to 115 S. LaSalle to accommodate the State’s operations after BMO Harris Bank vacates the building. The improvements to 115 S. LaSalle are expected to take 18 months with partial occupancy expected within eight months from the closing.

Google’s growth over the last two decades has taken the company from a two-person outpost in River North to a two-building campus in Fulton Market, which is home to more than 1,800 employees. The company’s rise in Chicago closely mirrors the tech sector’s economic expansion across the city. The recent Chicago Tech Effect study found that the city’s tech ecosystem grew by 18 percent in the last decade and supports 18% of the city’s workforce. Chicago leads the globe in its share of female founders and exceeds the national average for Black and Latino employment in tech by over 50 percent. A recent economic impact study shows that creating one high-tech job generates another 4.4 jobs in the local economy.

“When we bid to acquire the Thompson Center, we were committed to transform the building to be a world-class office building with the best available building components, systems and technology,” said Michael W. Reschke, Manager of JRTC Holdings, LLC and purchaser of the Thompson Center. “With one of the top locations in downtown Chicago, we knew after the planned renovation that the iconic building would attract world-class tenants. These transactions are transformative for the State and the City and will create key anchors for the future success of Chicago’s downtown district and LaSalle Street for many more generations.”

“We are thrilled to be working again with Mike Reschke on such a historic project,” said Quintin E. Primo III, Co-Manager of Prime/Capri Interests, LLC. “Together, we look forward to contributing to the economic health and vibrancy of the city while meeting critical goals of diversity and inclusiveness.”

CMS continues to seek opportunities and realign the State’s real estate portfolio to maximize space utilization in state-owned and leased properties throughout the State. The effort to identify efficiency improvements, space consolidation and the cost avoidance, including avoiding the backlog of required JRTC capital improvements, will result in over $900 million in taxpayer savings. Vacating JRTC and relocating to the 115 S. LaSalle building is expected to bring additional savings as the renovation at 115 S. LaSalle is expected to be less than the renovations at JRTC for the State’s portion of the out-of-pocket expenditures.

“The LaSalle Street corridor, which is at the heart of Chicago’s central business district, has become an attractive location for residents, visitors and businesses alike,” said Chicago Mayor Lori E. Lightfoot. “With this exciting announcement, we will be able to further reinvigorate this important, economic center and continue showing the rest of the world that our city is more than ready for catalytic investment. I thank Governor Pritzker and his team for enabling the Thompson Center to become such an important corporate campus project and look forward to seeing the corridor become even more of an asset to our city and region.”

“Today’s announcement demonstrates the State’s ability to creatively and effectively manage a complex transaction and its real estate portfolio while strategically leveraging a critical asset to create thousands of construction jobs and save taxpayers nearly a billion dollars,” said Acting Director of CMS Anthony Pascente. “Chicago is a global leader in technology and innovation and this unique transaction the State was able to negotiate will promote continued growth in the economy.”

Three determining factors in the State’s decision to sell the JRTC were the prolonged deferred maintenance backlog as well as high operating expenses. The estimated cost to bring the JRTC into a state of good repair currently exceeds $325 million, and is projected to increase to over $525 million, if not addressed by 2026. Additionally, the State pays more than $17 million annually in operating cost at JRTC due to the building’s operational inefficiencies and over $21 million annually in private leases in the Loop.

JRTC Holdings, LLC will perform a complete renovation of JRTC pursuant to the specifications of Google to transform the JRTC into a Class A office building. The proposed renovations will not require any shutdown to Chicago Transit Authority operations.

“It is exciting to see the Pritzker administration delivered on the sale of the Thompson Center, a concept that was discussed for nearly two decades, while optimizing the State’s real estate portfolio and saving the taxpayers more than $900 million over the next thirty years,” said Chief Operating Officer of CMS and JRTC Project Executive Ayse Kalaycioglu. “Businesses like Google are realizing the benefits of the central Loop and our investment on the LaSalle Street corridor will support the Loop’s continued economic revitalization.”

The State and JRTC Holdings, LLC have committed to a minimum of 26 percent Minority and 6 percent Women Business Enterprise contract participation on the 115 S. LaSalle renovation. Proposed scope of work at 115 S. LaSalle includes new energy-efficient exterior glazing, upgrading the building systems, elevators and miscellaneous interior upgrades to align with the State’s operations.