As electricity demand across the Midwest climbs, the amount of power available to the grid servicing a large swath of Illinois has dipped, prompting regulators to warn of controlled outages during extreme summer weather.

Rolling blackouts or brownouts typically associated with Western states may be necessary in Illinois and other Midwest states in the Midcontinent Independent System Operator (MISO) footprint. MISO is the regional electric grid operator that oversees power in 15 states, including the southern two-thirds of Illinois. 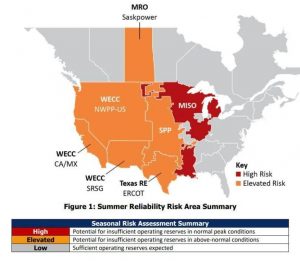 The summer peak forecast is 124 gigawatts with 119 gigawatts of projected regularly available generation within MISO.

“Over the last several years, MISO has observed concurrent trends of increasing extreme weather events that strain the system and an evolving generation portfolio with a higher percentage of renewables that increases the complexity of managing the bulk electric grid,” Morris said. “The reality for the zones that do not have sufficient generation to cover their load plus their required reserves is that they will have increased risk of temporary, controlled outages to maintain system reliability.”

“But this year’s summer assessment and capacity auction reflect the potential for the tightest conditions we’ve experienced,” Morris said.

“If my power goes out and it was a very hot day, or a very cold day, we could lose our livestock. They wouldn’t have water. The heaters wouldn’t kick on. The fans wouldn’t kick on,” he said during the hearing.

Meier recently spent thousands on a new generator to ensure his livestock would be able to survive if he’s not home to flip the switch.

“We need a reliable baseload energy source,” Meier said. “I’m not against clean energy. We need to have a plan that’s focused on getting there before we’re shutting everything down.”

Aside from logistical issues on the farm during a power outage, Meier pointed out another concern – energy prices.

Ameren Illinois warned customers they will pay more for electricity because of inflation, the conflict in eastern Europe and the closure of coal-fired electric generation facilities.

The average customer could see an increase of more than $600 annually.

But farmers aren’t the average customer.

“Can you imagine a farm when we go into drying grain? What that’s going to do (to our bills) now?” Meier told FarmWeek.

In the coming weeks, Meier plans to issue safety advisories, such as warning people not to run generators in their garages or homes.

“We need to be putting out reminders all summer long knowing that this is going to be a possibility,” he said.

Among the most vulnerable areas heading into summer is southern Illinois, according to a forecast by the North American Electric Reliability Corp. (NERC), a regulatory authority that monitors risks to the grid.

“Industry prepares its equipment and operators for challenging summer conditions. Persistent, extreme drought and its accompanying weather patterns, however, are out of the ordinary and tend to create extra stresses on electricity supply and demand,” said Mark Olson, NERC’s manager of Reliability Assessments, in a news release. “Grid operators in affected areas will need all available tools to keep the system in balance this summer.”

“MISO and its members drill and prepare for energy emergencies, and have many tools at our disposal to maintain grid reliability throughout these conditions,” he said.