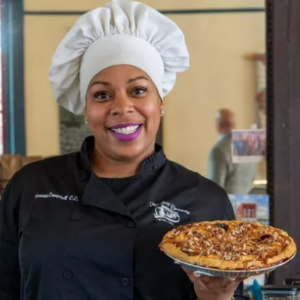 Yvonne Campbell, the owner of the popular eatery My Just Desserts, 31 E. Broadway, Alton, was vacationing with family in Hanover, Jamaica, when they were involved in a serious accident on Saturday, July 9. They were traveling via taxi back to their resort when the incident occurred.

While other family members are currently in recovery, Campbell remained unresponsive at a Jamaican hospital on Monday afternoon, according to a GoFundMe page set up by her daughter, Nakiyah Jackson. The GoFundMe page has been set up to help with medical expenses and with the costs of getting Campbell back home from Jamaica so that she can receive the surgery and aftercare that is now critical.

Donations can be made online at https://www.gofundme.com/f/yvonne-campbells-medical-expenses.

On the GoFundMe page, Jackson wrote, “Hello everyone, my name is Nakiyah Jackson, Yvonne’s oldest daughter. I am writing this on her behalf. Yvonne is the owner of My Just Desserts in Alton, IL. On Saturday, while on vacation in Jamaica, she endured a tremendously bad car accident and is now unresponsive.”

“We are trying to get her back into the states for surgery and aftercare plans. If you know Yvonne, you know she’d never enter a room without leaving you with a laugh, smile, or without giving you the biggest hug. She now needs your help; anything is greatly appreciated. Thank you in advance,” Jackson wrote further.

A story published by The Telegraph indicated that My Just Desserts is maintaining its normal business hours of Wednesday through Sunday, 10 a.m. to 3 p.m., and donations can also be made at the restaurant. Employee Lexi Groves can be reached at (618) 979-6325 or by email at alexisgroves14@yahoo.com for further donation information.

First reported by the Jamaica Observer, the accident occurred on Saturday afternoon when the tourist minibus that Campbell and other family members were traveling in collided head-on with a truck. A total of eight people were taken to the hospital with severe injuries, with Campbell among the six injured tourists that were rushed from the scene.

Two of the injured were trapped in their vehicle and had to be extricated from the wreckage by firefighters responding to the scene. The tourist minibus driver and a passenger in the truck were also transported to the hospital.

Editor’s Note: Some information for this story was gathered from the established GoFundMe page and from reports published by the Jamaica Observer and The Telegraph.

Yvonne Campbell, owner of My Just Desserts in Alton, shown.