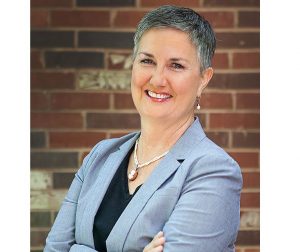 Glen Carbon resident Marsia “Marsie” Geldert-Murphey has her feet firmly planted in a profession that focuses on working from the ground up. Come this fall, she’ll be looking at it from a new perspective.

Geldert-Murphey is the newly chosen president-elect of the American Society of Civil Engineers for the 2023–2024 term, after a month-long election that closed June 1.

Specializing in transportation and geotechnical engineering, she is currently the regional director for Missouri and Illinois for the Lochmueller Group Inc., a Midwestern consulting firm.

The Society president serves as the chief representative and spokesperson for the group, working with ASCE’s executive director. The president chairs the Board of Direction and the Executive Committee and assists in educating and motivating members and potential members by promoting Society principles, policies and goals.

Geldert-Murphey has led an extraordinary life, with a string of professional successes — and a personal tragedy that nearly cost her life. In 2016, she was severely injured in a freak elevator incident that required many months of recovery.

Geldert-Murphey, who holds P.E., and F. ASCE certifications, has been actively involved in ASCE for 32 years. She served on the ASCE Board of Direction from 2016–2019 as the Region 7 director. The region is comprised of South Dakota, Nebraska, Iowa, Missouri, Kansas, Colorado, Wyoming and the southwest part of Illinois, where she lives and works.

She began her leadership within the Society as president of ASCE’s St. Louis Section in 2006 and as Region 7 governor from 2009–2013. Committees have kept her busy with programs, finance, leader training, diversity and mentorship.

The ASCE is active in lobbying efforts before Congress. It produces an Infrastructure Report Card every four years. The Society had a strong voice in the Infrastructure Investment and Jobs Act passed by Congress this year.

The Illinois Department of Transportation interviewed her for potential employment while she was still a student in South Dakota.

“Back in the day, IDOT had a really good rotation program where you served a certain period of time in each of the departments. I started out in construction, on the biggest construction project in the state at the time, with the Clark Bridge (in Alton),” she said. Her next rotation took her to design.

She spent eight years at IDOT, from 1992 to 2000. While there she earned her master’s degree in geotechnical engineering at University of Missouri at Rolla.

In 2000 she went to SCI Engineering, her first role in a consulting firm, specializing in geotechnical engineering. There, she made partner.

In 2006, she and Geri Boyer partnered to form Kaskaskia Engineering Group. Geldert-Murphey was there until 2012 when she sold her portion of the business to her partner.

She is originally from South Dakota, and her parents had taken sick, forcing her to travel back and forth to the state. She took a year away from the profession and during that time became more active with ASCE.

In 2013, she started another company, Sequoia Engineering and Environmental, in St. Louis. It was during that working period that the freak incident with the elevator changed her life.

It occurred March 17, 2016. She was in Washington, D.C., advocating on behalf of ASCE on Capitol Hill. She’d gone back to her hotel to hook up her computer, left her room and entered the upper floor elevator. What happened next remains a blur to this day. Something happened on the way down.

“The elevator doors opened on the ground floor, and I was incapacitated. I had a head injury, a back injury — and they don’t really know what happened. It’s never been explained.”

She suffered a skull fracture and was in a coma for eight days. She has no memory of the events.

She hired attorneys to look into the incident, but the findings were inconclusive.

“They couldn’t find anything that showed the elevator malfunctioned. It didn’t appear that I was attacked. So, they don’t really know what happened. The orthopedic surgeon who basically put my spine back together said the injuries were consistent with those he had seen in car accidents,” she said.

Brain trauma left her having to learn to walk and talk all over again. The physical therapy continued for the next year. Then followed seven surgeries on her spine.

At the time of the elevator incident, Geldert-Murphey had already sold Sequoia Engineering to another local firm, Gonzalez Companies. Part of the acquisition involved her establishing two new lines of business, Geotech and NEPA Services, which she did. Afterward, she had a year during which she again had a noncompete involving a restricted geographic area. She had to leave the roadway industry.

She went to work as chief operating officer for Jim Taylor Roofing. It was a totally different industry than she’d been accustomed.

“Lochmueller called me (about going to work) literally a week before my noncompete expired,” she said. She hadn’t been tracking the date, but Lochmueller was aware of it. Initially she turned them down, then reconsidered, after executive changes were underway at Taylor.

That was 2018; she remains at Lochmueller today.

Lochmueller is a Midwest company headquartered in Indiana. Geldert-Murphey is in charge of its Illinois and Missouri operations. She has a desk in both the St. Louis and Troy, Ill., offices.

She’s written three books on her many life experiences. One is called, “Cross, Yield or Burn – Navigating the Bridges of Life.” It encompassed the ups and downs of the years when she faced the strain of both her parents’ deaths in 2011 and the fact that she had small children at home, while running a business.

She sums up her plans for her new role, which she sees as a continuation of what she’s been doing.

“My vision of service as the leader of ASCE truly is in alignment with the Society’s purpose, vision, mission, and strategic goals,” said Geldert-Murphey. “In fact, my vision is as easy as A-S-C-E: A – Advocacy, S – Service, C – Competence, E – Engagement. … I believe ASCE must focus not only on the value we bring to our members but also on the ease and simplicity with which that value is conveyed, received, navigated, and experienced.”

Editor’s note: This story appears in the July edition of the Illinois Business Journal. For more stories go to the Current Edition link at ibjonline.com.