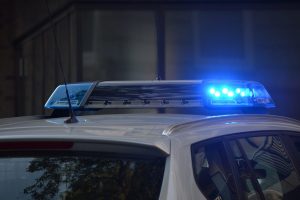 On Sept. 2, 2005, Jefferson Parish, Louisiana, had no water or electricity. Tired and dirty evacuees headed to the parish to try to escape the ravages of Hurricane Katrina.

In anticipation of the historic Category 5 hurricane’s landfall, an inmate, known then as Gary Moudy, was evacuated five hours north to Caldwell Correctional Center in Caldwell Parish. For weeks after Hurricane Katrina made landfall, there was chaos. Records were scattered. Documents lost. A prison official said the system didn’t know who it was holding or why.

That may be why that inmate was known as Gary Moudy until March 11, 2006, when he and four others tried to escape from Caldwell Correctional Center by overpowering guards and holding them hostage at knifepoint before fleeing the prison in a stolen truck.

The 24-year-old was captured quickly, according to news accounts. He hadn’t even made it out of town. Authorities unraveled the truth and discovered his real identity – Ray E. Tate, of Lawrenceville, Illinois.

More than 16 years after that dangerous escape and 600 miles north, Tate pleaded guilty in March to murder charges in connection with the shooting death of Wayne County Deputy Sean Riley.

In May, however, he asked to withdraw that plea and face a jury. Tate, now 41, wanted a chance at life outside of prison after spending much of his adult life behind bars.

He’s set for a hearing in Wayne County in August, and if the court allows him to withdraw the plea, prosecutors can reinstate the other 37 counts of murder, all pertaining to Riley’s death, that were dismissed as part of his plea deal.

Tate is also facing charges in Clinton County in connection with a multistate crime spree that included stolen cars, shootings, robberies, assaults and carjackings. It ended after an Illinois State Police SWAT team extracted him from a Clinton County home where he held two men hostage at gunpoint. He faces 30 counts, including home invasion and aggravated assault, all of which are pending.

Tate’s attempt to withdraw the plea is an effort to avoid dying in prison, where he has spent most of his adult life.

At 17, Tate was sentenced to four years in prison on residential burglary and theft charges, according to the Illinois Department of Corrections. Soon after his release, he was charged with burglary in his home county of Lawrence in 2000. He was 19.

Tate would return to jail on new charges soon after he was released. In 2002, he racked up his first weapons charge — unlawful possession of a firearm by a felon. In 2003, Tate’s crimes turned violent, with an aggravated battery with great bodily harm. He received a sentence of one year of probation.

But Tate never completed his probation, instead, he skipped town. He still owes Lawrence County $449 in probation fees.

In 2004 he was charged with fleeing and evading and wanton endangerment in Kentucky. He pleaded guilty with the promise of a three-year prison sentence, but while still free on bond he went on the run again.

Then, Tate was arrested in 2005 in Jefferson Parish in southern Louisiana.

He gave officers the name Gary Moudy, a classmate from Lawrenceville High School. He remained under that alias while he was awaiting trial and during his evacuation from Hurricane Katrina.

After the failed escape attempt, his cover was blown.

Tate was charged with aggravated assault and false imprisonment for his role in the jailbreak. He received a 15-year prison sentence, according to Louisiana prison officials. There was no record available to determine the Jefferson Parish charges that sent him there in the first place. It was likely lost in the wake of the damage wrought by Hurricane Katrina, one parish official said.

On March 15, 2013, Tate was set for release in Louisiana, but Kentucky wasn’t done with him. A Kentucky judge, angered by Tate’s absconding, sentenced him to 10 years in prison. Tate was released in 2021.

For a time, Tate, then 40, was free, unencumbered from warrants and detainers. He returned to Lawrenceville. He launched a tattoo business called Forbidden Ink. He reconnected with his family and met a girl.

Police next ran across Tate next in Vincennes, Indiana, on Dec. 16, 2021. They were investigating a suspicious person call. In the parking lot of a Red Roof Inn, they found Tate and a woman. Tate ran away. Later, they heard gunfire, and police said Tate fired a round into a man’s car in an attempt to steal it. The bullet missed the man.

Tate was again on the run.

For two weeks, Tate evaded police. On Dec. 29, 2021, a call came into Wayne County 911 at about 5 a.m. reporting a broken down car on Interstate 64 near Mill Shoals close to the Illinois-Indiana border. Wayne County Deputy Sean Riley took the call. A second officer later arrived at the scene and found Riley dead. His abandoned squad car was found later.

A truck driver reported that Tate ordered him at gunpoint to drive to St. Peters, Missouri. Robberies, carjackings and shootings followed. Tate is accused of kidnapping a driver and forcing them to drive back to Illinois. News bulletins went out, asking people to be on the lookout and to stay home.

Eventually, Tate was surrounded at a Clinton County home. An Illinois State Police SWAT team took him into custody.

Tate was back in county jail. He was moved to Jefferson County to await the charges for Riley’s murder in Wayne County.

On April 10, Tate tried unsuccessfully to escape. Two weeks later, he pleaded guilty to one of 38 counts of murder. He was sentenced to life in prison and sent to Menard Correctional Center near Chester.

He withdrew his guilty plea on May 19.

He’s scheduled to be back in court in Wayne County on Aug. 9.