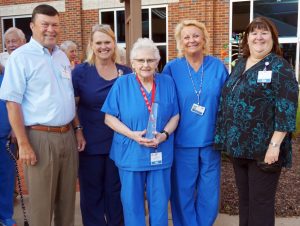 Diane Mize had quite the adventure while driving to her very first day of work at Alton Memorial Hospital. But she didn’t let it discourage her from coming back.

Mize has been working in the Digestive Health Center for 35 years now, but her total service time dates back to June 12, 1972, when she started on the old Med-Surg Unit on the first floor of the hospital’s Hatch Wing.

“I was driving here in an old Ford Fairlane,” Mize said of her first day. “The hood came loose and flew up on the windshield. I had quite a time getting here, but I managed to arrive on time.”

Although that was her first day as a full-time employee, Mize already knew the way to AMH from her home in Gillespie, Ill. She was a 1972 graduate of the Alton Memorial Hospital School of Nursing, which closed its doors just a year later. While the vast majority of the school’s alumni have either passed away or are retired, Diane is still going strong. (Gerry Giles, a certified registered nurse anesthetist with Team Health Anesthesia, is a 1973 graduate of the school who still works at AMH.)

“I developed a lot of close relationships at the school,” said Diane, who will be attending the School of Nursing’s reunion July 16 at the Best Western Premiere in Alton. “And of course the dorms were right out here on the campus. There were 20 in my class, so it was easy to keep in touch through the years.”

June 12 was a Sunday this year, so instead Diane was surprised on the morning of June 13 when she arrived at the hospital to begin her 51st year on the job. Amy Toenyes, her manager in DHC, was awaiting her with one of the hospital golf carts decorated with a 50-year banner. Amy then drove Mize around to the Healing Garden near the AMH valet entrance, where hospital leadership, some of her co-workers and some retired co-workers were there to greet her. AMH President Dave Braasch then presented Mize with her 50-year Crystal Service Award.

“I had no clue anything was happening,” Mize said with a laugh. “They did a good job keeping all that quiet. That was fun to ride around like that and nice to see all those people. I’m not much for attention, but it’s nice when it’s among friends. I’m very appreciative.”

That feeling is mutual. Her co-workers are in awe of Diane’s work ethic that’s still going strong after a half century.

“I’ve known Diane throughout the years, and she always puts her patients first,” Braasch said. “She lives and breathes our mission.”

“Diane has driven every morning for the last 50 years from Gillespie, and is always the first one here,” said Rachel Waters, another nurse in the DHC. “Diane has the department ready to roll when the rest of us get here — doors open, lights on, schedules printed for nurses and doctors, and IV bags spiked. And she is an IV whisperer. The most difficult of patients will request her by name.”

Vicky Garvey, team leader in DHC, has known Mize since coming to AMH 15 years ago. Vicky had experience in many areas of nursing, but not in GI. She found a great mentor.

“Diane is one of the sweetest people I know,” Vicky said. “She is extremely knowledgeable in the GI area. She is a great mentor for everyone in the department. Diane has an excellent memory. She remembers patient names and diagnoses when none of the rest of us can.

“We are a small department, and we all feel like family here. Diane will surely be missed when she one day retires. Until then, cheers to Diane for a great 50 years of service to Alton Memorial!”

Mize grew up in Bunker Hill and graduated from Bunker Hill High School in 1969. Her parents moved to Gillespie the next year and then Diane moved in to take care of her mother for many more years.

Mize had an interest in surgery, but eventually landed in the Digestive Health Center, where she worked for a long time with physicians such as Dr. David Riedel, Dr. Mark Allendorph (now retired) and Dr. Ahmad Karadaghy.

For the physicians, such an experienced hand on board is a great comfort.

“Diane and I have worked together so long that she anticipates all my moves during procedures,” Riedel said. “We could probably do every case without even speaking.”

“I really became interested in that and decided to stay there,” Mize said of the DHC. “And I don’t have any real plans to retire yet. I’m single, no kids, so I might as well keep going.”

Amy says that Mize is welcome to stay in some capacity even past any official retirement.

“Diane is more than welcome to continue in a PRN capacity and continue to admit patients for us,” Amy says. “The only difference would be that she wouldn’t have to take any calls or do procedures, which requires a bunch of standing and pushing the stretchers. We would love to keep her around as long as possible!

“Diane really loves just being a nurse. She has such a kind and gentle way about her and is frequently complimented by the patients on discharge calls. She has always been one of my go-to people for questions about the department.”

Mize never dreamed in 1972 that she would still be at AMH 50 years later.

“If I was still working the floors, I wouldn’t be able to keep up,” she said. “Then during COVID, Amy was good at keeping me away from those floors. Amy has been wonderful, very hands-on, and easy to work with. It really doesn’t seem like 50 years, it’s gone by kind of fast.”

When she’s not working, Diane reads, does some crafts, but mostly she is a big Cardinals fan – an allegiance that began with the unforgettable 1964 season, when the Cardinals came from way down in the standings to win the National League and then beat the great New York Yankees in the World Series.

“I don’t go to many games anymore, but I try to go once a year,” she said.

“A few of us nurses had the pleasure of taking Diane to a Cardinals game last summer and had a great time,” Waters said. “Diane is always in Cardinal red for home openers and always knows what’s new and happening with the team.”

Mize had three brothers, one of whom lives in New Zealand, and she has been able to visit there. Perhaps more travel awaits, but there is still more work to be done.

“Diane is kind and patient,” Waters said. “She is very easy to talk to about anything. She is a wonderful person and an outstanding nurse, and I have learned much from her over the years. They don’t make them like Diane anymore. AMH has been very blessed with such a devoted nurse and exceptional employee.”