State Rep. Katie Stuart, D-Edwardsville, says a bill she sponsored in the House will require insurance policies to provide coverage for the cost of genetic testing to better assess the risk of breast and ovarian cancers.

Gov. JB Pritzker signed HB 5334 into law on May 27. The new law requires that, beginning Jan. 1, 2024, all individual and group accident and health insurance policies provide such coverage.

“Cancer is the second leading cause of death among American women, according to the CDC,” said Stuart. “And breast and ovarian cancer are two types of this terrible disease which impact women especially. Early detection saves lives, and testing to alert physicians to the potential need for earlier and more frequent screenings will help more families avoid the pain of losing a loved one.”

The law mandates coverage for genetic testing of the BRCA1 and BRCA2 genes, which are often called “tumor suppressor” genes because they are associated with the body’s ability to repair damaged proteins. Those with abnormalities in one or both of these genes are at increased risk of developing certain cancers, most notably breast and ovarian cancers. Genetic testing can reveal these abnormalities early on, tipping off a woman’s doctors that they will need to be extra vigilant.

The bill was an initiative of Stuart, below, who sponsored it in the House. Other supporters included Planned Parenthood Illinois Action. 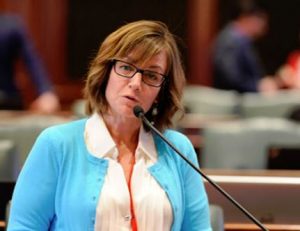