The County Board voted against making a decision to lower inspections fees by $200 from $375 for food trucks until its 5 p.m., July 20 meeting.

County Board member Mike Babcock said Alton Alderman Ray Strebel first brought the idea before the Health Department Committee in May, along with the owners of an Alton food truck park. The plan was to increase the number of food trucks coming into Madison County.

County Board member Terry Eaker of Bethalto said he was the only “no” vote at the Health Department Committee on June 3. He said the reason is simple — fairness.

“Everyone needs to be on the same playing field,” he said.

Eaker said he spoke to many restaurant owners as a well as a few food truck owners, who had no idea there was a plan by the county to reduce inspection fees. He said one business asked for a fee reduction.

County Board member Mick Madison of Bethalto said he wanted to see more information in comparison with other counties.

“Maybe we want to do things different,” Madison said.

County Board member Jaime Goggin of Edwardsville said in 2018, when the county established the ordinance for the operation of food trucks and permit fees, the board set fees to cover its actual costs.

“At the time I remember it cost the county more to inspect food trucks,” he said.

Currently there are 18 licensed mobile establishments in the county and around 1,400 restaurants/establishments. The Health Department charges fees for food permit licenses based on the categories of each food establishments, which is 1 through 3.

Mobile food trucks are considered Category 1 and Category 2 establishments and inspected the same as a “brick and mortar” restaurant and eateries. They are inspected twice a year.

The fees cover administrative costs within the health department and offset the cost of the food sanitation program.

Goggin said the fees should actually reflect what it cost the county.

“I would like to suggest something the administration could do,” he said.

He said a reciprocal agreement with other counties could be helpful in that food trucks would not have to get a license in every county, saving them money and making it easier to move between counties.

County Board member Bill Stoutenborough of Alton said although he didn’t plan to dine at a food truck, he does see it as a positive thing for the city and supports the fee reduction.
County Board Mike Walters of Godfrey said he was also in favor or reducing the fees. He said comparing brick and mortar establishments with food trucks is comparing apples to oranges.

“These trucks are seasonal and they are not here all the time,” Walters said.

Strebel along with President of AltonWorks Jayne Simmons gave public comment prior to the meeting asking the board to consider reducing the fees to promote business within the county.

Shane Cooper, owner of Geno’s 140 Club in Bethalto, spoke and said he brought other restaurant owners who came to the meeting, including Jimmy Johnson of Johnson’s Corner in Alton and Mike Castelli of Castelli’s Restaurant at 255 in Alton.

Cooper asked why would the county consider charging food trucks less than half what they charge a ‘brick and mortar’ establishment if they spent the same amount of time on inspections.

“The only difference between a ‘brick and mortar’ inspection and a food truck is ours is unannounced and theirs are by appointment only,” Cooper said. “We really don’t think that’s fair either.” 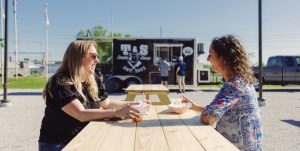 A scene from the opening of the Flock food truck park in Alton.