New senior leaders within HSHS are missioned and anointed in the healing ministry of the Hospital Sisters, as evidenced through the order’s core values of respect, care, competence and joy. HSHS President and CEO Damond Boatwright, HSHS Illinois Division President and CEO Joe Mullany, several Hospital Sisters, and many others celebrated with Klay.

“It is my honor and privilege to serve alongside the dedicated colleagues, medical staff members, and volunteers of St. Elizabeth’s Hospital as we successfully care for our Metro East communities,” said Klay. “The HSHS Missioning Ceremony is a beautiful tradition which not only honors our Franciscan heritage and Mission but inspires leaders in our responsibility of carrying the torch of our founding Hospital Sisters.”

Klay began his current role at St. Elizabeth’s on May 1, 2022, and was previously the president and CEO of HSHS St. Joseph’s Hospital in Breese, Ill. 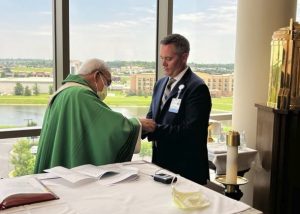 Father Eoli Roselada, OFM (left) anoints the hands of Chris Klay, recently named president and CEO for HSHS St. Elizabeth, during a Missioning Ceremony held on June 10, 2022. New senior leaders for HSHS are missioned and anointed in the healing ministry of the Hospital Sisters as evidenced through core values of respect, care, competence and joy. 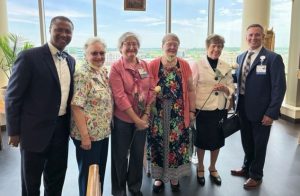