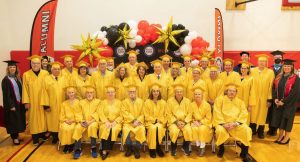 Southern Illinois University Edwardsville’s Golden Graduates paved the way for future generations of Cougars. These alumni, who graduated 50 or more years ago, returned to their alma mater this spring to celebrate with one another and with the Class of 2022 during commencement weekend May 4-7.

“In 2017, we began inviting alumni who graduated 50 or more years ago to come back to campus to celebrate this amazing milestone and to participate in the Golden Graduation Reunion,” said Cathy Taylor, interim vice chancellor for university advancement and CEO of the SIUE Foundation. “A highlight of the reunion is having our Golden Graduates participate in commencement. In doing so, we establish a common thread to connect the past and the future of SIUE.”

After hosting the Golden Graduation Reunion virtually in 2021 due to the pandemic, this year’s celebration marked a return to in-person events. The festivities, which highlighted the Class of 1972, kicked off with a virtual reception but also included participation in the annual Always a Cougar Graduation Celebration and a campus bus tour and reception.

The culminating event was a breakfast gathering after which the Golden Graduates participated in commencement alongside the Class of 2022. Donning their golden regalia, participants led the ceremony’s procession and received a commemorative medallion honoring their 50-year milestone.

From California to Florida to Guam, 95 Golden Graduates participated in the reunion, whether virtually or in person.

“I had the privilege of meeting Golden Graduates who spent their careers as doctors, dentists, lawyers, educators, business owners and even as an Olympic athlete,” said Taylor. “It was incredibly inspiring to hear the many stories of how SIUE helped prepare them for their futures. They were all thankful for the impact SIUE made on their lives.”

Mary Moran ’72, ’74 traveled to Edwardsville from Washington, D.C. to participate in the Golden Graduation Reunion. She earned both a bachelor’s and master’s in education from SIUE, which propelled her to a 40-year career working in the U.S. Department of Education.

“I had wonderful teachers. I declared a major in special education, because that’s where the very best instructors were, and the most exciting classes,” said Moran. “It’s hard to believe 50 years have gone by. I’m happy to be here and to remember so many happy times.”

Elaine Roche ’72, a New York native, earned a bachelor’s in English from SIUE. Roche’s degree served as the basis for her career as a librarian at the State University of New York at Buffalo. Later, in her role at a startup computer company in California, she discovered another passion: travel. Roche learned to sail and eventually launched a solo trip from California to Maine on her sailboat.

“I had the luxury of time and spent four years doing it,” said Roche. “It was quite a trip.”

Dave Hager ’73 and his wife Kathy ’72 traveled to SIUE from Wisconsin to attend the reunion. As a former director of university relations with the University of Wisconsin System, Dave Hager coordinated numerous commencement ceremonies of his own. At the reunion, he enjoyed strictly being a participant and taking advantage of opportunities to catch up with old friends and reminisce about his time as a resident manager at the Tower Lake Apartments and as a graduate student.

“The faculty I had were always so supportive,” said Hager, who earned a master’s in education. “They treated me and the rest of the graduate students with more maturity. Fifty years later, I still respect the fact that they treated me as someone who was responsible, and they were flexible, supportive and respectful.”

Carol Pashoff Winetroub ’72 shared many wonderful memories while earning a bachelor’s in Spanish at SIUE. She wanted to attend the Golden Graduation Reunion because, living in Iowa, she hadn’t been back to her alma mater in more than 30 years.

“I wanted to see how campus has changed and grown, and also to celebrate the University because it gave me such a great start and it’s continuing to do that for so many,” said Winetroub, a social worker. “It was an honor for me to be here to recognize and applaud the 2022 graduates. I hope they can change the world and make things a lot better for all of us.”