SPRINGFIELD – For the first time since lawmakers expanded the state’s hate crime law in 2018, Illinois Attorney General Kwame Raoul is launching a civil lawsuit against two Illinoisans for allegedly engaging in hate crimes.

The lawsuit says two residents of Carroll County in northwest Illinois lynched an effigy of their neighbor, who is Black, to intimidate him. Cheryl Hampton and her adult son, Chad Hampton, both white, also allegedly displayed a Confederate flag and a racial slur in a window facing their neighbor Gregory Johnson’s home.

Raoul’s complaint argued the effigy was used “as a threat of racial violence against Johnson, because he contacted law enforcement about the Hamptons” stemming from a dispute about damage to Johnson’s lawn. 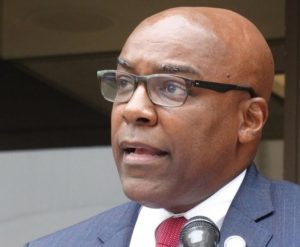 The attorney general’s complaint includes two counts each against Cheryl and Chad Hampton for intimidation and disorderly conduct as part of a hate crime, seeking a $25,000 maximum fine under state law for each count.

Each count also seeks other unspecified relief deemed necessary by the court and a prohibition on the Hamptons from contacting Johnson or participating in any damage to his property or other violations of Illinois hate crime laws.

Raoul (file photo, shown) said the lawsuit would “send a message that hate and bigotry of any kind are not welcome and will not be tolerated.”

“Our complaint alleges the defendants intentionally used the shameful history of lynching and racism in America to terrorize and instill fear in their next-door neighbor simply because he is Black. No one should be subjected to this kind of hate,” Raoul said in a news release.

The complaint details a history dating back to July 2020, when Johnson notified police in the city of Savanna that a fence on his property was damaged after Cheryl Hampton had threatened to tear it down.

Johnson again contacted police after witnessing Chad Hampton “purposely” spray weed killer on Johnson’s lawn, damaging the grass. Chad Hampton was charged with a misdemeanor for damage to property, and in September 2020 he allegedly painted swastikas on his garage facing Johnson’s house.

Police returned to tell Hampton to remove the swastikas in September 2020, and by October 2020, the effigy of Johnson was hung from the Hamptons’ tree.

“The life-size effigy resembled Johnson by design,” the complaint stated. “The head consisted of a mask intentionally painted black and a curly wig altered to resemble Johnson’s hair. The stuffed clothing used for the body resembled Johnson’s clothing. A noose made of rope hung the effigy by the neck from a tree a few feet from Johnson’s property. A large chain bound the effigy’s hands and torso.”

Savanna police returned to the Hampton home and, according to the report, Cheryl Hampton “openly admitted” she hung the effigy to target Johnson because she was “tired” of Johnson complaining about “everything she and her son did.”

After a visit from police and the town’s mayor, she refused to move or alter the effigy, so police took custody of it and charged Cheryl Hampton with a felony for intimidation of a witness. Court documents show that case is still pending.

On Nov. 1, Chad Hampton contacted the police department stating he would like to file a complaint for damage to property because police had cut the hanging figure down from the tree.

The Hamptons rented the property in question and no longer resided there as of the filing of the lawsuit, according to the complaint.

In a news release distributed by Raoul’s office, Johnson said the lawsuit is “about never giving up on the mission of our United States Constitution.”

“I looked out of my new home at a Black-faced mannequin shackled and lynched on a tree branch, the N-word scrawled upon a window, and swastikas,” Johnson said in the release. “Our American flag was replaced with their Confederate flag. Have we not come any farther than this? This lawsuit is about tearing off the shackles that still restrain us to this day. … We, as a nation, are better than this.”

The ability for the AG to file suit on behalf of the people of Illinois is found in a 2018 update to the state’s hate crime law.