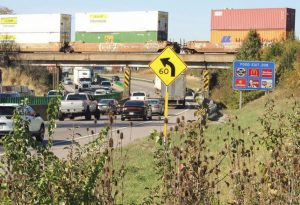 A long-range vision to reconstruct Interstate 70 into a high-capacity corridor between St. Louis and Kansas City is getting some priority, thanks to a new partnership.

The Kansas City SmartPort and the St. Louis Regional Freightway this week signed a Memorandum of Understanding to demonstrate their commitment to support improvements to Missouri’s east-west statewide I-70 corridor, which is vital to the global supply chains for many industries. A catalyst for the new collaboration is the inclusion of a financial placeholder for the reconstruction of and added capacity on I-70 among the Missouri Department of Transportation’s recently released High Priority Unfunded Needs.

“We’re excited to see this placeholder on the list, even though it’s a far-off priority at this time,” said Mary Lamie, executive vice president of Multi Modal Enterprises at Bi-State Development and head of the St. Louis Regional Freightway. “All of us here recognize the importance of this stretch of Interstate 70 from a global freight perspective as a transportation corridor, supporting the global supply chain for aerospace, automotive, ag industries and others. It provides a critical link to multimodal connectivity and reliability.”

The MOU will serve as a marketing tool under which KC SmartPort and the St. Louis Regional Freightway will undertake activities aimed at raising awareness of the economic, multimodal and efficiency impact of the I-70 corridor and promoting improvements that will enhance the safety of travel along it. These efforts will help bring public and private sector leaders together to understand how infrastructure and efficiency impacts on-time delivery and cost for freight.

Both organizations recognize the power of collaboration to advance statewide initiatives like this and also to move projects forward in their respective regions.

The St. Louis Regional Freightway’s Priority Projects list already includes multiple projects on I-70 in the St Louis region, some of which have recently secured funding. Examples include $62 million for the I-70 outer roads improvements from Fairgrounds Road to Cave Springs and $39 million for the I-70 bottleneck improvements from Wentzville to Route Z in St. Charles County. Lamie said a major contributor to that funding success is recognition of the key economic drivers along I-70 in the St. Louis region, including the General Motors Wentzville facility, Boeing, St. Louis Lambert International Airport, and multiple fast growing industrial sites.

“Like St. Louis, the I-70 corridor is a critical freight corridor as well as a passenger corridor for our region,” said Chris Gutierrez, president of KC SmartPort. “Our Greater Kansas City Chamber of Commerce, Council of Governments — the Mid-America Regional Council, and my organization all have made this a priority corridor in our long range, transportation planning with a focus, of course, on the I-70 piece heading east from here to several of our outer roads, Interstate 435 and Interstate 470. They’re doing some preliminary engineering work on those. They’ve got design-build models in place to expand and increase the capacity. It’s critical for us to locate manufacturing and distribution on this corridor.”

Gutierrez said like St. Louis, Kansas City has a General Motors plant in the region and they have seen suppliers like Faurecia that have located just to the east of downtown Kansas City to be able to supply both GM plants in Kansas City and St. Louis, as well as some major distribution centers that supply product, both consumer goods and e-commerce, to the greater region along I-70.

At True Manufacturing, Inc., Chester Jones manages the supply chain operations team responsible for coordinating the company’s overall supply chain, both domestically and internationally. Headquartered in O’Fallon, Mo., the 75-year-old company is a leader in the commercial and residential refrigeration space. It has operations in Latin America, Central America, Europe and Canada, and its biggest market is here in the United States. Jones said his company ships product to the Netherlands, South Hampton and the Port of Liverpool in Great Britain to get into Europe and even ships to Australia. Ships carrying True Manufacturing products leave from Norfolk, Virginia and New York ports on the East Coast, as well as the LA-Long Beach port complex on the West Coast.

“Our headquarters sits right off I-70 here in O’Fallon (Mo.) and we often say here that I-70 is the heartbeat of True Manufacturing,” said Jones. “With facilities located to the west in Mexico, Mo., then down south in Pacific, Mo., and north in Bowling Green, Mo., we traverse I-70 with about 88 trucks per day going between the headquarters facility and those facilities. We also have an expansion project south in Poplar Bluff, Mo., and that means our daily transit around I-70 and I-270 will become somewhere around 98 to 100 or 102 moves a day. So, it’s key for us to have ease of access and the ability to move quickly throughout the area.”

“We are using just about every mode of transportation out there — rail, LTL, ocean, and air,” Jones said. “From our Mexico facility, we ship most of our international goods. We’re moving about 10 to 12 container loads a week, which come back here to catch the rails out of St. Louis headed east. There’s a significant amount of volume there. We also have about 20 to 30 over the road shipments per day from over the road carriers. Some of the feedback we get from them is that they like the ease of the on and off exits from I-70 and love the proximity to other interstates like I-270, I-44 and I-55. And they really hope that development continues on I-70 itself. Just with our own operations, going out to all of these different countries and areas, you can see that not only is I-70 key for us, but also rail and we certainly are interested in waterways as well.”

Recognizing the importance of reliable infrastructure for companies such as True Manufacturing and the many others operating along I-70 and around the state, Missouri Governor Mike Parson in 2021 formed a new Supply Chain Task Force that both Gutierrez and Lamie serve on with other appointees.

“The Governor and the Task Force we serve on is really trying to understand what’s happening: why freight might be bottlenecked in certain places or why freight isn’t moving as fluidly as we’d like,” Gutierrez said. “Kansas City hosted a meeting recently and had the port director from the Port of Los Angeles as our keynote speaker. He talked about a lot of challenges from growing demand from consumers to COVID, to steamship lines, railroads, trucking, and others really, all at once, having their own issues, but kind of slamming together during COVID. He said a critical point is the best and most efficient way to move freight in the U.S. is to locate your facilities in the Midwest, specifically Kansas City. We’ll give credit to St. Louis as well because that freight will move fluidly, too. You don’t have the bottlenecks. You don’t have some of the challenges.”

That fluidity of movement is making both Kansas City and the St. Louis region hotspots for industrial development. Gutierrez said they announced in recent weeks there were 16 500,000-square-feet or bigger speculative buildings in the Kansas City market under construction, and he anticipated that half of those had been spoken for since then, given how fast the market is moving, with no signs of slowing down. St. Louis is also seeing a similar trend with spec buildings and industrial development.

All of that growth, along with strategies that support anticipated growth by True Manufacturing and other companies, helps make the case for the work needed to improve the I-70 corridor.

“Our recovery (pandemic) and growth strategies are paramount,” Jones said. “For us, things that continue to support growth and the ease of transit and logistics is key, because we’re rooted here in Missouri; we are contributing to the logistics and the development of manufacturing activities. We’re really on the upswing and we would like to see the infrastructure follow that path as well.”

The signing of the MOU was announced during a panel discussion on May 26 as part of FreightWeekSTL 2022 that featured Gutierrez and Jones, and was moderated by Lamie. The weeklong, online event featured panel sessions with industry experts and leaders in freight, logistics and transportation.