More than a half a billion dollars in recent, current or expected improvements at three Midwestern ports will strengthen these facilities and reinforce their important roles in the global freight network.

The significant investments at Port KC, America’s Central Port, and Kaskaskia Regional Port District, along with new infrastructure funding recently secured, will spur an increase in barge services and deliver cost efficiencies that drive profitability for the industry. Port KC is located on the Missouri River. America’s Central Port is on the Mississippi River and the Kaskaskia Regional Port District serves both the Mississippi and Kaskaskia Rivers. 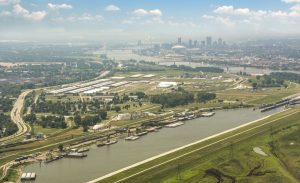 Located at the heart of the U.S. transportation network, with access to six Class I railroads, two multi-modal harbors, four U.S. interstates, and home to more than 85 manufacturers and freight intensive operators that employ approximately 1,000 individuals, America’s Central Port (shown above) in Granite City, is one of the largest freight hubs in the Midwest and has experienced success in securing federal and state funding for several recent projects and others that are working their way through the facility.

Two port projects funded through the Illinois Department of Transportation’s Competitive Freight Program include a recently completed $1.2 million rehabilitation project to revitalize the Granite City Harbor general cargo dock with a 12-inch reinforced concrete pavement and new rail track that serves the harbor facility, and $2 million for a new entrance off of Illinois Route 3, which touches Interstate 70 on the south and Interstate 270 on the north, connecting the two.

“We see about 18,000 cars a day coming past port property,” said Dennis Wilmsmeyer, ACP executive director. “This new entrance will give us immediate access to the heart of our industrial park and create a new street along the front of our warehouses. The project will soon be out for bid and we’re expecting construction to start here this summer.”

Other infrastructure investments at ACP include a nearly $500,000 grant from the Illinois Department of Commerce and Economic Opportunity under the Opportunity Zone Program to realign and reconstruct West Fourth Street in the port’s Warehouse District. ACP was also awarded funding in the Rebuild Illinois Program for three projects, including a sediment reduction project in Madison Harbor to increase operational efficiency and reduce long-term expenses. Another recent award tied to ACP is a BUILD grant secured by SCF Lewis & Clark Terminals, the port’s barge and harbor operator, to fund improvements at four river terminals in the St. Louis bi-state region, including two at ACP. 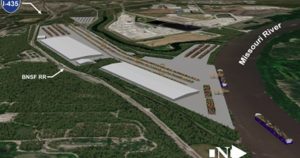 Another major Midwestern port infrastructure improvement project is being partially funded through a $9.88 million Port Infrastructure Development Program grant administered by the U.S. Maritime Administration. Mark Coulter, vice president and general counsel for Port KC  (rendering above), said the large-scale project in the Kansas City, Mo., area, focuses on a 415-acre, former steel mill site that was acquired in 2018.

The PIDP funds will help Port KC put a plan in place to make the property as marketable as possible in order to attract private capital to help cover the construction cost of approximately a half-a-billion-dollar terminal project.

As part of the planning process, a market study was performed to assess freight volume coming in and out of Kansas City. The study revealed that nearly 500,000 TEU’s come through Kansas City each year, and of those, Kansas City was the final destination for 225,000, positioning Port KC as the second largest port in the Midwest with a justified need for an exceptional terminal facility.

“As we look to build this facility, we’re looking at a generational project, 40 to 50 to even a hundred years, and making sure that Kansas City is positioned well for the next century,” Coulter said. “We’re very excited about it.” He said the grant is really giving Port KC the opportunity to kick it off, leverage their funds and other federal dollars, along with state funds that support their operations. “We knew we needed to attract the big dollars, and that’s really why we focused so hard on our terminal facility and the Missouri River Terminal that we’re looking to build.”

To help improve reliability of navigation on the Missouri River, John Grothaus, program manager for Missouri River Studies, Kansas City District of the U.S. Army Corps of Engineers, said a Bank Stabilization and Navigation Project (BSNP) study is currently in progress with Port KC as the primary non-federal partner – with the support of several stakeholder partners.

“The goal of the BSNP system is to maintain the navigation channel by managing both water and channel dimensions, and also sediment, which makes for quite a bit of a challenge given the meteorological and hydraulic uncertainties in the Missouri River system,” Grothaus said. “The preliminary objectives for the study are to improve the performance of the BSNP considering a wide range of flows – from drought to flood –  to reduce the cost of transporting commercial products, and to evaluate future operations and maintenance based on new information, which will  and improve navigation safety and, overall resiliency and function of the system.” 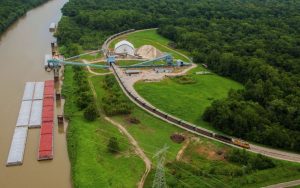 At Kaskaskia Regional Port District (above) in Southwestern Illinois, both state and federal grant dollars allowed for a strategic plan to be created for the overall port and each terminal location, identifying needed improvements for which they were subsequently able to secure additional funding or expect to.

General Manager Ed Weilbacher said those projects include construction of a second entrance road at KRDP 2, a second rail loop at KRPD 1 to accommodate two million tons of additional outbound product, safety improvements to railroad crossings, enhancements to the rail yard and more. In all, the investments will total more than $30 million. KRDP is also partnering with the U.S. Army Corps of Engineers on modifications at the Jerry F. Costello Lock and Dam to make it more resilient during high-water events. That project just received $10.4 million for upgrades that will begin later this year. KRPD is also working cooperatively with the Corps on a Section 107 Harbor study, and that is a 50/50 cost share program that will likely lead to construction in the coming years due to the initial cost-benefit ratio.

Weilbacher said the recent designation of the Kaskaskia River in Illinois as a Marine Highway Route (M 3) was driven partially by a new company that is expected to ship an additional 1.2 million tons of coil steel inbound for processing. The new route will include existing freight traffic between the terminals on the Kaskaskia River and the Mississippi River and in turn open new opportunities to leverage private investment through public and private partnerships and support supply chain resiliency efforts.

All three port operators agreed how important collaborating with other partners, users of their facilities and others around them is as well as with the U.S. Army Corps of Engineers. They praised grant funding of upwards of $80 million that USACE secured to reduce flood risk by further strengthening levees in southwestern Illinois in the St. Louis region to higher current standards. Another timely accomplishment for the Metro East Levee System, which consists of five levees in Madison, St. Clair, and Monroe Counties, was the final letter of accreditation received from the Federal Emergency Management Agency in April of this year acknowledging the levees now meet 100-year flood levels.

“These three ports are playing an important role in the global freight network, and the infrastructure funding recently secured will prepare these facilities for future growth,” said Mary Lamie, executive vice president of Multi Modal Enterprises at Bi-State Development and head of the St. Louis Regional Freightway. “It’s also evident the USACE (Corps) is supportive of this growth and is taking various steps to improve the reliability of our waterways and the equipment that supports the movement of barge traffic along them. The investments occurring today will help to deliver cost savings that will produce profits for the barge industry and contribute to future success.”

Lamie led a panel discussion on May 25 as part of FreightWeekSTL 2022 that featured Wilmsmeyer, Coulter, Weilbacher, and Grothaus. FreightWeekSTL 2022 continues online through May 27 and features panel sessions with industry experts and leaders in freight, logistics and transportation. The week-long event is presented by the St. Louis Regional Freightway and Bi-State Development in conjunction with The Waterways Journal. To learn more or register for the remaining sessions or view past sessions for FreightWeekSTL 2022, visit www.freightweekstl.com.

The St. Louis Regional Freightway is a Bi-State Development enterprise formed to create a regional freight district and comprehensive authority for freight operations and opportunities within eight counties in Illinois and Missouri which comprise the St. Louis metropolitan area. Public sector and private industry businesses are partnering with the St. Louis Regional Freightway to establish the bi-state region as one of the premier multimodal freight hubs and distribution centers in the United States through marketing, public advocacy, and freight and infrastructure development. Visit thefreightway.com.