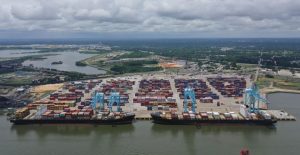 APM Terminals, which serves 10,000 customers worldwide, moves products through 76 terminals in its global network. The St. Louis region will become part of that network with the opening of a planned Container-on-Vessel (COV) port south of St. Louis, by a development team that includes APM Terminals, which will be working to line up shippers to use the new port.

The St. Louis region will become part of one of the world’s most comprehensive port networks when the development team that includes APM Terminals opens a planned Container-on-Vessel (COV) port south of St. Louis, in the Herculaneum area.

APM Terminals serves 10,000 customers around the world, moving products through 76 terminals in its global network. APM Terminals will be working to line up shippers to use the new port and will also be the operator of a planned container terminal and intermodal rail facility at Plaquemines Port, Harbor and Terminal District, located south of New Orleans.

These two ports will be critical hubs on a new, all-water, north-south trade lane connecting the Midwest and the St. Louis region to the lower Mississippi River and on to worldwide destinations. The APM Terminal development project was the focus of the May 24th FreightWeekSTL 2022 session.

The session featured a discussion between Brian Harold, Managing Director of APM Terminals’ Mobile, Alabama facility, and Mary Lamie, executive vice president of Multi Modal Enterprises at Bi-State Development, which operates the St. Louis Regional Freightway. Harold said APM Terminals’ operations in Mobile on the Gulf Coast is currently a major gateway to the population centers in the Midwest, providing a competitive alternative to congested East and West Coast ports and helping to improve the overall supply chain flow.

“The supply chain challenges around the world have started to put a little bit more of a highlight on places of different routings,” Harold said. “The Port of Mobile has been able to help alleviate some of the recent stress through its excellent railway connections. We have five Class 1 railroads that have direct access into our intermodal rail facility in Mobile, and that facility has a tremendous amount of throughput capacity. With some of the challenges on the West Coast – as far as vessel wait times – it’s just as fast now to move a container through the Port of Mobile for cargo coming from Shanghai [via the widened Panama Canal] and going to Chicago as it is for cargo coming through the Pacific Northwest and Southern California.”

Harold said with beneficial cargo owners (BCOs) now seeing the viability of moving freight through the Gulf Coast, the amount of volume coming in is increasing tremendously. Inland operations, like the proposed site in Herculaneum and other sister ports that would also connect with the Gateway Port in Plaquemines, could further alleviate the stress being felt on the East and West coasts and help provide relief to the railroads.

“We see value with the usage of the inland waterways as it relates to containerized cargo in the United States as there just isn’t very much moving on the rivers right now, and everyone sees potential there.”

Harold acknowledged that, traditionally, many shippers have been reluctant to rely on river as a mode of moving cargo due to the length of transit time. But new COV service featuring patented vessels that will be significantly faster than traditional barge tows, with upriver speeds of 13 miles per hour, will be a game-changer. Larger vessels would move containerized cargo between Plaquemines and St. Louis, Memphis and other proposed hub ports, while smaller vessels will be able to move through locks and low-lying bridges on the tributary rivers, providing service from the Herculaneum port to feeder ports along the Mississippi, Missouri and Illinois Rivers, including ports in Kansas City and Jefferson City in Missouri, Joliet and Chicago in Illinois, and Fort Smith in Arkansas.

“The partnership between Herculaneum and the Plaquemines Port will reduce the transit time going up the river very significantly,” Harold said. “Round trip from Plaquemines to Memphis will be seven days, whereas currently on a traditional barge service, it’s about double that.”

He added, “What shippers are finding now is that transit time is important, but consistency is even more important. In Plaquemines and Herculaneum, we’re going to have to service these vessels as they arrive and keep them on schedule and jointly show, between our two ports, that when someone’s cargo arrives in Plaquemines, we can have it in Herculaneum rather consistently within a certain transit time. And if the shippers can depend upon that week after week and day after day, then that’s something that they’re going to continue to grow.”

APM is currently working with global shippers to integrate the proposed new COV service with Midwest manufacturers and producers who will utilize the new port in the St. Louis region. “The general message from shippers is either, yes, they want to participate in this or, if we can prove to them that this is a reliable service, then they will participate in it,” Harold said. “We already have some guaranteed contracts, especially on the export side, southbound, going back to Plaquemines, which is very encouraging. We have certain milestones that are about to be met within the project, and as they are met, then we’ll be able to take these efforts into second gear.”

While the launch of the new COV service is still a couple of years away, Harold is optimistic the success they are seeing in Mobile can be replicated. The tonnage moving through APM’s Mobile terminal is growing 20 to 25 percent each year as shippers see the viability of the Gulf Coast as a gateway from Asia to the U.S. The company has made several investments to support continued growth since opening in 2008. Those include a $50 million expansion that was finished in 2017 that added 150,000 twenty-foot equivalent units (TEUs) of throughput capacity and two additional cranes. That was immediately followed by a three-year project that added an additional 150,000 TEUs in capacity and extended APM’s linear dock to handle bigger vessels. The company also has plans for a $100 million expansion with its partners within the Alabama State Port Authority to develop 30-plus acres, grow throughput capacity by upwards of 300,000 TEUs and add two additional cranes. Harold noted the importance of having multiple ports within the Gulf of Mexico to support continued growth and larger vessels coming in, underscoring the need for the additional investment in the new port in Plaquemines and the various other hub ports that will be part of the new COV service.

Lamie said APM Terminals growth in helping move freight through the Gulf Coast will present significant opportunities for inland ports, like St. Louis. “It’s clear from today’s discussion that working with APM Terminals delivers many benefits for the Beneficial Cargo Owners, and it’s exciting to think that the proposed new Container-on-Vessel Port in the St. Louis region will also add value for this critical audience as part of that network.”

FreightWeekSTL 2022 continues online through May 27 and will feature panel sessions with industry experts and leaders in freight, logistics and transportation. The week-long event is presented by the St. Louis Regional Freightway and Bi-State Development in conjunction with The Waterways Journal. To learn more and register for the remaining sessions or view past sessions for FreightWeekSTL 2022, visit www.freightweekstl.com.