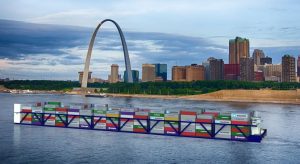 Above, an artist’s rendering of what the container vessels would look like on the Mississippi River.

A collaborative effort to launch the first, patented Container-on-Vessel service to the Midwest continues to make progress, with several key milestones being reached in recent weeks.

Work is already getting underway to prepare for the safe debut of the patented vessels, which will operate on a new, all-water, north-south trade lane connecting the St. Louis region to the lower Mississippi River and on to worldwide destinations.

“Our vision is to offer a new-value added service to the supply chain, which will provide optionality at a lower cost for the shippers,” said Sal Litrico, chief executive officer of Florida-based American Patriot Container Transport LLC. He said optionality is needed more than ever, given the recent transportation and logistical issues that have created major challenges for shippers with no real end in sight, coupled with exponential growth projections in containerized cargo.

Litrico said there are three key legs of the new COV service.

The first is the new regional Gateway Terminal located on the Gulf Coast in the Plaquemines Parish area of New Orleans, which will provide full intermodal service at the widest and deepest part of the river with no operational constraints.

The second is the strategically located Midwest partner ports, which like the Gateway Terminal will be state of the art and incorporate automation and a green footprint.

The third leg is the patented, state-of-the-art, purpose-built vessel which will come in two classes – the liner vessel that will move containers on the Mississippi River and smaller, hybrid vessels that will operate in the tributary rivers. Litrico said, the vessels have significant competitive advantages, which include critical mass volume and speed.

One of the milestones recently reached is the letting of bids for construction of four new vessels, with an option for four more. These will be built in U.S. shipyards, per the Jones Act Requirement, a federal statute, and Litrico said they are continuing to work closely with interested shipyards to achieve a mutual beneficial result within the next 30 to 45 days.

Another milestone is the signing of long-term cargo commitments for Phase One of the operations, which is the service between the Gateway Terminal and Memphis, which is expected to be the first Midwest hub port to come on line. That service will include four dedicated vessels capable of making the round trip in 6.2 days.

The Gateway Terminal has secured initial rail funding, and APM Terminals, which is part of Maersk, has agreed to operate the terminal. Looking at Phase Two of the initiative, Litrico said they are working with key beneficial cargo owners (BCOs) and shippers to secure cargo commitments, which will be for an additional four vessels and subsequent Midwest ports, to be determined by the shippers later this year. The operational startup date is projected to be the second half of 2024.

Hawtex Development Corp. is playing a key role in the development of the container terminals on the inland waterway systems, helping to identify suitable locations where the inland vessels could come into port and where

they would develop an actual inland intermodal container yard. Memphis and the St. Louis area are two sites they have targeted. Hawtex President James Hurley said they are now under development at both sites, with potential ports also being considered for Joliet, Ill., and Fort Smith, Ark. Feeder ports in Jefferson City and Kansas City would also be part of the system. Focusing on the site in Herculaneum, Mo., just south of St. Louis, he said they have a development agreement with Fred Weber/Riverview Commerce Park, which has the current operations, and are in discussions with a second property owner to bring them into the project.

“The coordination between these two companies has been very impressive from my standpoint, as a developer,” Hurley said. “We’re very comfortable moving forward with how we’re integrating both properties into this single development for the container terminal itself and the supporting area around it.”

The new inland container terminal facility in Herculaneum would be built on approximately 75 acres, and there is an additional 125-plus acres for further development of an industrial park behind the terminal, leveraging the close proximity to Interstate 55 and the existing rail connection. Hurley said they are completing 10% design drawings by Vickermon & Associates, a port and intermodal design firm from Virginia, and hope to put out a contract for construction in a few months with the goal of having the operations available at Herculaneum by the Fall 2024.

“In the U.S., this mode of transportation has not really been trusted because in the past, it normally been done by barge here. We’re actually creating river vessels that are strategically built for the purpose of utilizing the Mississippi River to its absolutely fullest and also the tributaries,” said Denson White. “We’re going to be able to move inland at a very efficient pace. In Europe that’s exactly the same thing. The build of the ships are made to where they can move via the river system, always get underneath and through the bridges and move at a faster pace than a barge would.”

White is director of Customer Engagement at APM Terminals, which operates 76 port terminals worldwide, including several in Europe where river vessels are a common method of transportation to get product inland.

Arenstam is the project manager for SCI regarding the partnership with Americana Patriot, and has four different areas of emphasis: vessel modeling, port feasibility studies, navigation, and officer assessments and navigation training.

“The mariners that will be navigating the ship will actually have a hydrodynamic model to practice on and learn how the ship handles before departing the shipyard,” Arenstam said. He said the prep work will take place in the shipyard, using four world class Kongsberg Maritime interconnected simulators along with the feasibility studies. This will enable them to have the COV along with other models of existing inland towboats operating in the area of the proposed ports to test how they will be able to interact.

Daniel Every, lieutenant commander with the U.S. Coast Guard and Prevention Department Head, Sector Upper Mississippi River, is also playing an important role in ensuring the safe launch for this new service.

“Our primary goal is to ensure that the Marine transportation system and Marine transportation system users are prepared for this new service through both education outreach and collaboration with all of our port partners and stakeholders up and down the river system,” Every said. “We want to work closely with both the vessel and facility owners and the operators to ensure that it’s a safe and effective business from the start, and that everyone is postured to support this major development, while also providing equity in the waterway use amongst all waterway users.”

Every said he believes the COV is one of the most significant innovations in the maritime industry in a very long time, likening it to the expansion of the private space travel industry in Florida.

“With the fairly recent expansion of the Panama Canal and the unprecedented deepening projects on the east coast and along the Gulf coast ports, the ability to efficiently and cost-effectively move containerized cargo along the river hinges on the ability to move containerized cargo at speeds that meet customer’s needs while offering the shipper economy of scale. So, a purpose built vessel of the proposed design is an exceptionally novel idea. It fills an existing logistics gap in that area by providing economy of scale and speed that both cargo owners and logisticians want to see. So, I expect that demand will be there,” said Every.

White agreed, and said part of success will stem from the recent supply chain disruption which has forced BCOs to revisit their existing ways of doing things. “CEOs that have never been a part of supply chain that might have only thought about sales and manufacturing are now stepping in and trying to understand more of how can they can more efficiently move their cargo, and here’s our opportunity to really make some headway in providing more solutions, more opportunities for people to choose from.”

“Our new transportation alternative for containerized cargo is necessary and strategic, adding optionality to the supply chain and shippers and provides choices, potential savings, and the opportunity to enhance or expand the shipper’s profile or distribution model,” Litrico said. “Also, a greener footprint has tremendous value and will achieve shippers long term objectives.”

Mary Lamie, executive vice president of Multi Modal Enterprises for Bi-State Development and head of the St. Louis Regional Freightway, moderated a discussion of COVs progress on Monday, during FreightWeekSTL 2022.

“If there’s one key takeaway, I think it has to be the depth of the collaboration in place to bring this new service online — collaboration with various partners to build out the individual ports, collaboration between the folks who will provide this service, the Coast Guard, and the Seamen’s Church Institute to ensure the highest level of safety are adhered to to actually launch these services. And, ultimately, the collaboration between the different port facilities along this new trade route and with the shippers who will benefit from the innovative new offering.”

FreightWeekSTL 2022 continues online through Thursday, May 27, and will feature panel sessions with other industry experts and leaders in freight, logistics and transportation. The week-long event is presented by the St. Louis Regional Freightway and Bi-State Development in conjunction with The Waterways Journal.

To learn more and register for the remaining sessions or view past sessions for FreightWeekSTL 2022, visit www.freightweekstl.com.