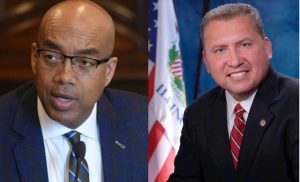 SPRINGFIELD – Two former state senators who sponsored and voted for bills to reduce lawmakers’ pay and forgo annual cost of living adjustments are now asking the Illinois Supreme Court to declare those measures unconstitutional and award them their back pay.

Former Sens. Michael Noland, D-Elgin, and James Clayborne, D-Belleville, have been successful so far in their legal efforts, prevailing in 2019 in Cook County Circuit Court before Judge Franklin Valderrama. But Illinois Comptroller Susana Mendoza, the defendant in the case, filed a direct appeal to the state’s highest court arguing that Valderrama got the decision wrong.

In 2009, when Illinois and most other states were dealing with budget crises brought on by the Great Recession, lawmakers passed a pair of measures that eliminated their automatic cost-of-living adjustments and required them to take one furlough day each month, which had the effect of reducing their base salary.

In each subsequent year through 2019, lawmakers passed substantially similar measures. Noland voted in favor of each one until he left the General Assembly and Clayborne voted in favor of them whenever he was present for the vote. And both men routinely touted their support for those measures to their constituents.

But when Noland left office in 2017, he filed a lawsuit arguing that the measures were unconstitutional under the legislative pay clause of the Illinois Constitution, which says lawmakers’ salaries may not be changed during the term to which they’ve been elected. Clayborne joined the suit after he announced that he would not seek reelection but before his last term officially ended.

At the circuit court level, Judge Valderrama declared the legislative actions unconstitutional on their face and thus void from the very beginning, meaning it is as if they were never enacted in the first place. He then issued an order directing Mendoza to pay the claims.

Mendoza, through Attorney General Kwame Raoul’s office, appealed on three grounds. While she did not challenge the finding that the legislative acts were unconstitutional, she argued that the former senators had effectively waived their right to any relief by voting in favor of the pay reduction bills.

She also argued that the former lawmakers waited an unreasonable length of time before filing their claims – a concept in law known as “laches” – and that their claims should be barred by the statute of limitations, which is generally five years.

At the circuit court, however, Judge Valderrama ruled that the clock on the statute of limitations did not begin to run until after he declared the acts unconstitutional. He also ruled that salary claims by public officials cannot be waived and that the laches defense was not available to the comptroller based on previous court rulings, including one from 1941.

During oral arguments Wednesday, however, Justice Mary Jane Theis noted that as recently as last year, the court upheld a laches defense in a constitutional lawsuit brought by John Tillman, CEO of the conservative Illinois Policy Institute, who sought to force the state to default on billions of dollars worth of payments on bonds that had been issued years earlier.

“And this court a year ago said no, that claim talking about … $14.35 billion of taxpayer money is subject to laches,” Theis said.

Justice Robert Carter also appeared to take issue with the idea that the statute of limitations clock didn’t begin to run until the law was declared facially unconstitutional.

The court took the case under advisement and is expected to issue a ruling later this year.