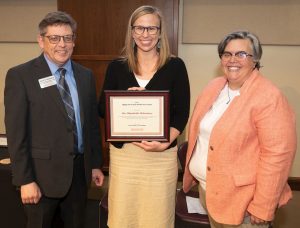 “School psychologists face cultural and structural obstacles that reduce the likelihood that they will effectively engage in the kinds of leadership and advocacy needed to ensure that all students receive appropriate and effective services,” McKenney said. “This project addresses this disproportionality by using MTSS, which focuses on providing students with an appropriate level of support, through a public health model of service delivery.”

The Hoppe Research Professor Award recognizes and supports SIUE faculty members whose research or creative activities have the promise of making significant contributions to their field of study. The award supports a significant portion of a faculty member’s larger research agenda for a two-year period. Recipients are expected to produce published scholarly works and externally sponsored funding.

“The Graduate School is excited to support Dr. McKenney, who is a highly accomplished researcher in the field of school psychology,” said Associate Provost for Research and Graduate School Dean Jerry Weinberg, PhD. “Her work to improve student’s mental well-being and address social inequities is exactly the kind of impactful research the Hoppe award founded to support.”

The study will advance McKenney’s research agenda by combining her existing areas of expertise in supporting evidence-based interventions (EBIs) in school settings and facilitating culturally-responsive, socially-just models of service delivery toward empowering school psychologists to deliver meaningful and impactful services within their unique practice settings.

According to McKenney, school psychologists possess an abundance of knowledge regarding the kinds of services that benefit children and adolescents, in turn helping schools serve as healthy, safe environments for all. However, they are often confined to roles and activities that do not fully utilize and engage that knowledge.

“Dr. McKenney’s history of successful scholarship in school psychology broadly defined, and consultation and social justice scholarship specifically, provides further evidence that this project is in direct alignment with the award’s purpose,” said Greg Everett, PhD, chair of the Department of Psychology. “It is likely to be a sought after means to provide school-based instruction in the areas of social justice and MTSS.”

McKenney plans to submit her research findings for external funding to study the impact of a training program targeting practicing school psychologists’ knowledge of socially-just MTSS and the advocacy skills needed to create and sustain such services.

A loan fund was established in 1976 through the SIUE Foundation by Joseph W. Hoppe, because he believed in SIUE’s mission and the value of faculty research. Four years later, the Hoppe endowment became the basis for the Hoppe Research Faculty Award. In 1999, the award was transformed with the help of SIUE academic deans into the current Hoppe Research Professor Award program.