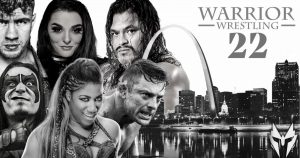 Warrior Wrestling will make its area debut on Saturday, May 28, at the Gateway Convention Center in Collinsville.

New Japan Pro Wrestling main event star Will Ospreay will defend the Warrior Wrestling Championship against St. Louis resident Davey Richards. Ospreay is considered among the top professional wrestlers in the sport. Richards was considered the same in the early 2010s before he left wrestling for several years to study medicine and raise his family. This will be the first time that Ospreay and Richards will compete.