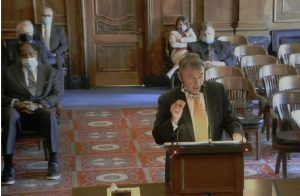 Former Chicago Bears defensive lineman Richard Dent, seated front row left, watches as his lawyer, Paul G. Neilan, argues before the Illinois Supreme Court Wednesday. Dent was seeking to have the identity of a sexual harassment accuser revealed so he can pursue a defamation claim, but the Supreme Court denied his petition last week. (Credit: Blueroomstream.com)

Richard Dent won’t be able to learn the names of the people who accused him of sexual harassment and drunken disorderly conduct in 2018, the Illinois Supreme Court ruled last week.

The former Chicago Bear, Pro Football Hall-of-Famer and 1986 Super Bowl MVP had sought the identities of three employees of energy supplier Constellation NewEnergy Inc. in pretrial discovery in an effort to sue the individuals for defamation.

But in a 4-2 decision, the Supreme Court ruled that the accusers in this case have a “qualified privilege” to anonymity, which Dent failed to overcome, because their claims were made during a workplace investigation of sexual harassment. It overturned a ruling from the First District Court of Appeals.

Dent’s team blasted the decision as “without precedent” Friday and said it was planning to file a petition asking the court to revisit the decision, alleging it misunderstood or overlooked facts.

The basics of the case are that Dent’s energy supply, products and services company, RLD Resources, had several contracts with Constellation that were severed in 2018 after Constellation investigated a claim from a female employee who accused Dent of telling her she had a “butt like a sister” in 2016 in Philadelphia and groping her at an event in Chicago in 2018. The only named witness said they had seen Dent acting “drunk and disorderly” at a separate Chicago location prior to the alleged groping.

The contracts were at-will, so Constellation had a legal right to sever them without cause. Dent was not suing Constellation for defamation, but for the names of the accusers who he believes defamed him.

The case was brought under the narrow Supreme Court Rule 224, through which the justices were asked to weigh the rights of a person to know the identity of their accuser against the right of a harassment victim to anonymously report an incident to their employer.

In terms of Illinois defamation law, “qualified privilege” is based on a policy of “protecting honest communications of misinformation in certain favored circumstances in order to facilitate the availability of correct information,” the Supreme Court wrote in its opinion, authored by Republican Justice Michael Burke. Democrats Robert Carter and Mary Jane Theis joined Republican David Overstreet in the majority.

The opinion quoted a 1999 ruling in Vickers v. Abbott Laboratories, which stated, if “no privilege existed, then victims of harassment and companies with a goal of preventing harassment would be ‘handcuffed’ by a fear of defamation liability.”

While Dent didn’t know who the accusers were, Constellation did divulge the alleged misconduct. And in his petition to the court, the majority wrote, Dent failed to establish “any reckless act showing a disregard for Dent’s rights” – a necessity to overcome the privilege.

Republican Justice Rita Garman wrote the dissent on behalf of her and Democratic Justice P. Scott Neville, stating she was “troubled” that the majority believed a party seeking defamation claims would have to allege concrete facts against a person whose identity is not known to overcome the privilege.

“I am concerned that the majority opinion essentially treats the qualified privilege as an absolute privilege, which in turn endows a private company and its third-party investigators with quasi-judicial status and impermissibly deprives a class of individuals of the ability to restore their reputations following investigations that arguably lack procedural safeguards,” she wrote.

It’s the same argument Dent’s team had been making, while also arguing that Dent should have been allowed to amend his petition with more information.

“What the majority opinion does is say that because Constellation conducted a reasonable employer investigation, not only is Constellation protected by the privilege, but so are the unidentified defamers – even if they’re lying through their teeth,” Dent’s attorney, Paul Neilan, said in an email. “The majority’s opinion is absolutely without precedent.”

Neilan said the team would petition the court for a rehearing under Supreme Court Rule 367, and he also took issue with giving the witness of “drunken disorderly conduct” the same privilege, even though he didn’t testify to the alleged groping.

In a lengthy news release issued Friday, Dent’s team accused Constellation of concocting the allegations using racially charged language as a pretense for severing the contracts once Dent had connected Constellation to a lucrative energy supplier deal with the NFL Hall of Fame.

“We are encouraged by the Illinois Supreme Court’s ruling, which protects the identities of employees who speak up when harassment, intolerance or inappropriate behavior occurs in the workplace,” the statement read. “Constellation is committed to ensuring a safe, respectful and inclusive environment for employees, and we will continue to address behavior that does not meet that standard.”

While the public might never have learned about the allegations had Dent not initiated the legal proceedings, he told Capitol News Illinois in a February phone call that he went forward because he believed he had been defamed as one of the only major Black players in the state’s multi-billion-dollar energy industry. Dent also asserted that he has never been drunk in his life.

Also, on the phone call with Dent and CNI in February was former Waukegan Mayor Sam Cunningham, who said he was with him for the entire timeframe in which the allegations would have occurred and they were both fabricated.

“They chose not to interview him,” Dent said of Constellation’s internal investigation. “We arrived at the event at the same time, and we were together the whole time. I gave them the mayor’s number to reach out to him, but they never reached out to him.”

Constellation separated from its parent company, Exelon Generation, in February after the court already heard the case. While under Exelon’s umbrella in 2020, the companies spent about $2.7 billion on diversity-certified supplier expenditures.

Dent’s team also suggested there may be a level of intrigue based on Exelon’s well-documented pull within state government, which, they alleged, led to a reading of the petition in a more favorable light for the company.

At the time of the incident Constellation was a subsidiary of Exelon, which also owns Commonwealth Edison, a public utility that admitted in court documents that it participated in a “yearslong bribery scheme” aimed at indicted former House speaker Michael Madigan in exchange for favorable legislation.

Chicago Alderman Ed Burke, who has also been indicted on charges of racketeering and bribery, is a partner in the law firm that saved ComEd millions of dollars via property tax appeals – the allegations against Burke, however, don’t relate to ComEd. He’s also the husband of Supreme Court Chief Justice Anne M. Burke, who took no part in the Dent decision.

Burke and Madigan both deny wrongdoing. Justice Michael Burke, who wrote the majority opinion, is not related to Anne or Ed Burke.

Despite the broad intrigue, it was the narrow ruling on Supreme Court Rule 224 which prevented Dent from learning the identity of his accusers.

Jerry Nowicki is the bureau Chief of Capitol News Illinois, a nonprofit, nonpartisan news service covering state government that is distributed to more than 400 newspapers statewide. It is funded primarily by the Illinois Press Foundation and the Robert R. McCormick Foundation.