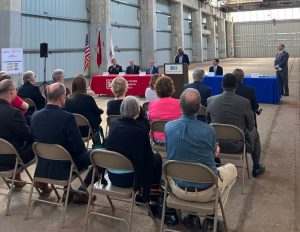 Dignitaries with Leadership Council Southwestern Illinois, Madison County and others gather Wednesday at America’s Central Port in Granite City to announce the formal accreditation of the local levee system, an effort years in the making.

After years of efforts, the Metro East Levee System, which consists of five levees in Madison, St. Clair, and Monroe Counties, has been given its final letter of accreditation from the Federal Emergency Management Agency for 100-year flood levels, officials announced this week.

The Leadership Council of Southwestern Illinois, a group of business and civic leaders fostering economic growth in Metro East, announced the latest developments on Wednesday.

In August of 2007, FEMA announced its intention to de-accredit the levees, which protect 156,000 residents and more than 4,000 businesses.

Based on past funding, it was estimated that the needed improvements wouldn’t be completed until 2044, which meant residents and businesses may face major flood insurance premium increases.

Local and state officials decided to come together and find a solution.

In 2009 the Southwestern Illinois Flood Prevention District Council was formed by Madison, St. Clair, and Monroe Counties, and a quarter-cent sales tax was passed to pay for the necessary improvements to the levee system.

The Leadership Council Southwestern Illinois also formed the Levee Issues Alliance to serve as a watchdog group for the project, and to raise awareness about the levee system. 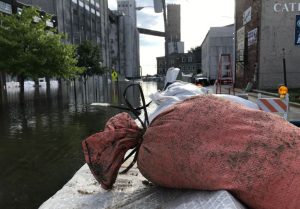 Work to bring the entire 65-mile stretch of levees to the 100-year level has been completed at less than half of the initially projected cost, and as of April 26, 2022, FEMA has issued its final letter of accreditation.

A 100-year flood is a flood event that has a 1 in 100 chance of being equaled or exceeded in any given year.

PHOTO: Flooding in September 2019 along West Broadway in Alton prompted the erection of barricades, including sandbags. Though severe, the flooding was small compared to the Great Flood of 1993, considered among the worst in the Midwest.