OSHA issued a series of recommendations to Amazon on Tuesday, calling on the corporation to improve its severe weather responses in the wake of the deadly tornado that roared through an Edwardsville warehouse in December, killing six.

However, the U.S. Department of Labor’s Occupational Safety and Health Administration did not issue a fine.

OSHA does not have a standard that requires severe weather emergency plans but recommends them under the Occupational and Safety Health Act’s General Duty Clause, which requires employers to provide a place of employment free from known hazards.

“These tragic deaths have sparked discussions nationwide on the vital need for comprehensive workplace emergency plans,” said OSHA’s Regional Administrator William Donovan, in Chicago. “Employers should re-evaluate their emergency plans for the safest shelter-in-place locations and prepare before an emergency to ensure workers know where to go and how to keep themselves safe in the event of a disaster.”

Five of the deceased and the injured worker were independent direct service provider delivery contractors that took shelter in a bathroom on the warehouse’s south side, near the loading docks. Two worked for AB&C D.A.D Inc. of Belleville, one for Boxify Logistics of St. Louis. XSeed Delivery of Bolingbrook employed two of the other deceased workers and the injured worker.

The three direct service providers will also receive hazard alert letters from OSHA encouraging them to review severe weather procedures for their drivers. The sixth worker fatally injured was employed by CBRE of Seattle as an in-house contractor assigned to the Edwardsville facility.

Learn more about how to prepare for weather-related emergencies. 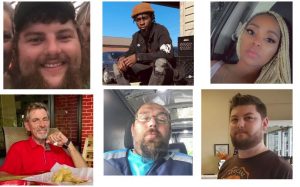 Amazon  is currently defendant, with others, in a number of lawsuits tied to the tragedy. Attorneys for the victims’ families contend the company acted with negligence in the construction of the building.