Southern Illinois University Edwardsville’s Department of Physics in the College of Arts and Sciences is partnering with the Arts & Issues series to present the annual William C. Shaw Lecture featuring Brian Greene, PhD, professor of physics and mathematics at Columbia University.

The lecture entitled “Revealing the Universe – A Journey to the Frontier of Understanding” will take place at 7:30 p.m. Thursday, April 14, in the Morris University Center’s Meridian Ballroom, with a book signing following the event in the Goshen Lounge. 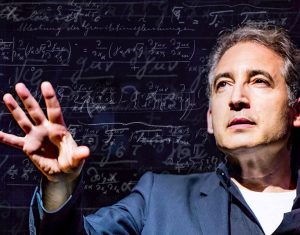 “We’re excited to once again collaborate with the SIUE Department of Physics and its Shaw Lecture series to present Dr. Brian Greene, one of the world’s leading theoretical physicists who is known for his entertaining and inspiring lectures,” said Grant Andree, director of Arts & Issues.

A Harvard graduate and Rhodes Scholar, Greene is a prominent theoretical physicist, mathematician and string theorist. He is known as an excellent communicator of cutting-edge scientific concepts. The Washington Post described him as “the single best explainer of abstruse concepts in the world today.”

Greene currently serves as co-director of Columbia University’s Institute for Strings, Cosmology, and Astroparticle Physics. He is the author of four acclaimed books, including “Until the End of Time,” “The Elegant Universe,” “The Fabric of the Cosmos,” and “The Hidden Reality,” which have collectively sold more than two million copies, been translated into more than 40 languages, and spent 65 weeks on The New York Times Best Seller List. His books are also the basis of two Emmy and Peabody Award-winning NOVA miniseries, both of which Greene hosted.

The event is sponsored by the SIUE Graduate School and the Dr. William Shaw Lectureship Endowment. Tickets can be purchased at artsandissues.com.

The William C. Shaw Lecture features outstanding scientists who speak on primarily astronomy-based topics. The series commemorates the teaching career of Professor William Shaw, who taught at SIUE between 1959 and 1973 and passed away in 1977.

Arts & Issues is tied to the academic mission of the University. For 37 years, the series has presented some of the world’s finest performing artists and showcased speakers from across the spectrum in areas such as science, history, literature, and politics. The program also offers unique experiences for students, faculty, staff, and the community to engage with these performers and speakers through master classes and special sessions.