ISP flag will fly atop Capitol dome in April

SPRINGFIELD — From his ceremonial office at the Capitol Tuesday, Gov. JB Pritzker proclaimed the 12-month period beginning April 1 as the Illinois State Police centennial year, ordering the ISP flag to fly atop the Capitol dome for the month of April.

The news conference in Pritzker’s office followed an appearance on the Capitol’s east lawn, where a fleet of new black-and-white squad cars and ISP officers lined up in front of the Abraham Lincoln statue. 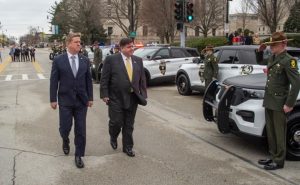 Pritzker, at a news conference in his office, told a story of an ISP that formed in 1922 to “maintain order and safety on its massive number of newly paved roads.” ISP Director Brendan Kelly said the first class of ISP troopers consisted of eight individuals driving motorcycles “that were left over from the First World War.”

“The makeup of the ranks of our state troopers has changed too. Women and people of color weren’t allowed to serve 100 years ago. Today they are among ISPs highest ranks,” he said.

The centennial event came amid a political backdrop in which crime and the state’s response to it is top of mind in the early stages of the 2022 campaign season in which every seat in the General Assembly and all constitutional offices are up for grabs, including the governorship.

That much has been evident in the campaign materials from Pritzker’s Republican challengers who are aiming to peg Democrats as soft on crime. And it was evident Monday night when a Pritzker appointee to the Illinois Prisoner Review Board received just half of the votes needed for approval in a Senate dominated by Democrats.

It was also evident in the question-and-answer session following the governor’s news conference, during which Pritzker fielded questions about rising crime, officer-involved shootings and the political fight for the PRB.

“I believe that our police are out there trying to protect our communities as best they can, sometimes in extraordinary and difficult circumstances,” Pritzker said. “So we ought to stand up for our police, whether they’re state police, local police. Obviously, where there are police who aren’t doing the job, people who are mishandling their duties, they need to be held accountable for their actions.”

Pritzker acknowledged crime is up across the state and nation, attributing the trends partially to a “pandemic recession.”

“And so we’ve got to make sure that we’re bringing order back, that we’re putting away the people who actually committed crimes. And that means supporting the ISP, it means supporting law enforcement. And I’m going to continue to do that with the work that we do, not only to build up the ISP and local law enforcement, but also to make sure that the laws are adhered to.”

But as Pritzker and Kelly headed out to the Capitol grounds to shake hands with rank-and-file ISP troopers, Richard Irvin, a Republican challenger for governor, issued a news release criticizing the governor’s 2021 signature on a criminal justice reform bill known as the SAFE-T Act.

The Irvin release also called attention to the votes of Pritzker Prisoner Review Board appointees who voted to free two individuals who were charged with the 1976 murder of ISP trooper Layton Davis. One of those individuals, Aaron Hyche, 71, was released on medical parole and suffers from cancer, Parkinson’s disease and dementia.

Four PRB members with controversial voting histories have exited the board in recent days, one by resignation, one whose appointment was pulled by Pritzker and two who were rejected by the Senate.

Pritzker said the PRB members are charged with examining the original crime, whether the offender is rehabilitated, whether they caused problems while incarcerated and whether they would be a danger to the public.

Republicans have seized on Pritzker’s signature on the SAFE-T Act which eliminates cash bail beginning next year in favor of a system prioritizing the offender’s threat level over ability to pay. It’s to be defined in the courts. The bill also requires body cameras be implemented by 2025, a measure which Pritzker said would increase accountability and trust.

The GOP has publicized the SAFE-T Act as detrimental to officer morale, blaming it for resignations in sheriff’s offices and police departments across the state and for making recruitment of new officers difficult.

When asked about recruiting officers, Pritzker pointed to a nationwide labor shortage and emphasized the brotherhood of ISP and strong wages as a recruiting hook.

Kelly said law enforcement is a “challenging and difficult job,” but it’s also “a calling” and he’s optimistic recruits will continue to materialize.

“Throughout history, the way the public feels and interacts with law enforcement, that sentiment, it ebbs and flows,” Kelly said. “And I believe we’re at a point where the respect for law enforcement and the desire to make sure that the role of law enforcement is strong, and that it is within the expectations of the public, is moving in a positive direction.”

Pritzker’s proposed budget also includes $4.5 million to fund body cameras for ISP in accordance with a criminal justice reform bill passed one year ago, as well as providing the Illinois Law Enforcement Training and Standards Board with $10 million for distributing grants to local law enforcement for body cameras.

Pritzker has also touted $240 million in proposed funding as part of a two-year, $250 million commitment to the Reimagine Public Safety Act, which aims at investing violence prevention resources in some of the state’s most dangerous areas. Of that, $235 million is funded through the federal American Rescue Plan Act.

Norton, now 91, served from 1960 to 1990 in the ISP Division of Criminal Investigation and Division of Narcotic Control, and was commander of Illinois State Police District 3, now known as District Chicago.

He was previously awarded the Medal for Honor, which is awarded to Illinois State Police personnel who perform a heroic act that “by its nature results in saving a life, preventing a serious crime, or apprehending a person who committed a serious crime.”

Pritzker said Norton remains committed to ISP, providing military guidon flags for each cadet and recruit class for several years. Norton has also developed flags for the office of the ISP director, first deputy director and each division. Pritzker said those flags will be encased at a 100th anniversary ceremony this Friday.

“A veteran of the Korean War and the US Department of Justice, Captain Norton has spent more than 50 years in service of his community, to his state, and to his country,” Pritzker said. “He is among the very best of Illinois. So without further ado, it is my honor to bestow the ISP Achievement Medal on him today.”

Norton thanked the governor for his efforts on behalf of ISP and for attending ceremonies for officers killed in the line of duty.

Pritzker bestowed the medal in his Capitol office on Tuesday as part of a commemoration of the Illinois State Police’s 100th anniversary.