Discussions between business, labor continue on retiring other $1.8 billion

The measure, an amendment to Senate Bill 2803, also included over $1.4 billion in general revenue fund spending to pay down other state debts.

Gov. JB Pritzker said at a news conference Thursday that he will sign the bill as soon as it hits his desk.

“Every Republican voted against paying down our state’s debts,” Pritzker said at the news conference in his office. “Clearly, they’ve decided that because it’s an election year, they’re willing to put politics ahead of the people of Illinois. It drives me crazy to see that it drives them crazy to acknowledge the Democrats have done what their party hasn’t done – pay down debt and balance the budget while giving people real tax relief.”

Republicans, meanwhile, said that not allocating greater funding to the trust fund deficit will force some combination of tax increases on employers or benefit cuts to those on unemployment as a solution to paying down the remaining $1.8 billion in trust fund debt.

The trust fund is the pool of money paid into by businesses that funds unemployment claims. The debt accrued as the state borrowed from the federal government at the height of the pandemic to keep the trust fund solvent amid an unprecedented crush of claims.

When states accrue trust fund debt, the ways to pay it down have historically included raising insurance premium rates paid by employers, decreasing unemployment benefits, or seeing a new influx of cash, such as federal, state or private funds. 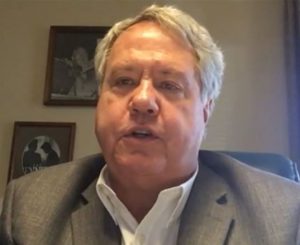 Rep. Jay Hoffman (shown), a Swansea Democrat who is a lead House negotiator on unemployment issues, said discussions continue with business and labor interests on addressing the remaining $1.8 billion. But at least $2.5 billion was needed to keep those negotiations moving forward.

“This is an agreed bill process. Business and labor have to agree or we’re not going to move the bill,” he said of ongoing negotiations to pay down the $1.8 billion. “This was a budgetary measure in order to make it easier on the agreed bill process.”

Hoffman said in 2011 after the Great Recession, the state went to the private bond market to pay down a $2.3 billion trust fund deficit and dedicated a revenue stream from increased employer premiums to pay it down. On Thursday, Hoffman said employers “took the entire responsibility to pay off the bonds” in 2011 and there were no benefit decreases.

In a July email to Capitol News Illinois, Illinois Retail Merchants Association president and CEO Rob Karr – a negotiator on behalf of business in 2011 and currently – said the only concession from labor at the time was agreeing to a slight decrease to the dependent child allowance for unemployed individuals.

They issued a statement regarding the ongoing negotiations.

“Today’s vote will inject $2.7 billion from the American Rescue Plan (ARPA) into the Illinois Unemployment Insurance Trust Fund,” they said in the statement. “Illinois employers appreciate the governor and members of the General Assembly for taking this positive step in addressing the massive $4.5 billion in outstanding debt. We’re hopeful that negotiations will continue to resolve the remaining balance of this unprecedented deficit.”

Private bonding is a path being considered again this time around. The state needed to act by April 1 to keep all options – including increasing premiums, lowering benefits or bonding – on the table moving forward, according to House Majority Leader Greg Harris, a Chicago Democrat who sponsored the bill. Hoffman said he is hopeful the parties will agree by the April 8 adjournment date.

The governor’s office held closed-door meetings throughout the day on Wednesday to discuss the debt retirement proposal. A late amendment increased the previously planned allocation to the trust fund from $2 billion to the $2.7 billion sum.

After the Governor’s Thursday news conference, the parties returned to negotiations.

Democrats said the $2.7 billion will come from an unallocated ARPA fund balance that sits at about $3.5 billion. Illinois received $8.1 billion directly from the ARPA stimulus plan signed by President Joe Biden last year.

But Republicans urged full repayment of the $4.5 billion, noting that about $6.9 billion in ARPA funds remains unspent, even if more than that has been promised in previous spending plans that passed the General Assembly.

Before the pandemic, the state had $1.2 billion in its trust fund, Rep. Tom Demmer, R-Dixon, said in a floor speech on Wednesday night. Republicans urged the state to use ARPA funds to replenish that amount as well.

Republicans urged reallocating other ARPA funds, particularly a $1 billion sum allocated last year to capital projects, to pay down the entire debt to stave off the negative consequences for employers and workers.

Republican Senators, in a Thursday news conference after the vote, did not identify any other ARPA funds that they would like to see reallocated to be put toward the trust fund.

“If it was up to me, I would have taken $5.5 billion a year ago – $4.5 billion to completely wipe out this debt that we have to the federal government … and $1 billion to get back to our $1 billion solvency target, which is part of the law today,” Sen. Win Stoller, R-East Peoria, said at the GOP news conference.

GOP Senators said a $16 billion revenue windfall in recent years – including $8.1 billion from ARPA, $3.4 billion from a previous federal stimulus and $4.6 billion in state revenue growth beyond what was projected for the current year – should have first been used to pay down the deficit before other allocations.

Democrats called their action a fiscally prudent measure that goes a long way to addressing the trust fund problem while allowing other necessary expenditures of ARPA funds.

“You know as well as I do that we’ve used the ARPA funding during this emergency to support those institutions and those businesses who have been on the frontlines and delivering health care in our communities,” Harris said in response to Republican criticisms Wednesday.

He pointed to spending for hospitals, nursing homes and purchases of personal protective equipment, as well as trust fund payments to gig workers and increased unemployment payments to workers which were paid by the federal government.

“And actually, I’m proud that we spent that money to be sure that these Illinoisans were protected, and the fact that you want to take it away from them, you think we should have shorted them – shame on you,” he said.

Pritzker on Thursday pointed to other expenditures of federal funds such as to aid child care providers, small businesses, homeowners and renters.

As of Wednesday, the state had already accrued $41 million of interest on the debt and it continued to accrue at a rate of 1.59 percent. That interest was due to be paid by Sept. 30, according to the U.S. Treasury.

By November, without action, that interest was expected to grow to $80 million, Hoffman said. Interest can’t be paid through ARPA, so it would require a General Revenue Fund allotment, he added. Taking action by November would diminish that amount, he said.

GOP lawmakers argued that Democrats could have staved off some of that interest accrual by acting earlier. When lawmakers passed a budget last year, Sen. Chapin Rose, R-Mahomet, and other Republicans called out the majority party for not acting on the trust fund deficit.

“When I brought this up a year ago, and I said you are failing to take action, you are going to make this worse, and you’re going to hurt people,” he said Thursday. “And here we are a year later. That’s exactly what’s happened.”

Because Democrats put off action on the trust fund for over a year, the GOP said, interest not only accrued on the outstanding debt, but interest rates for the bonding the state is considering to pay down the remaining $1.8 billion will have increased as well.

In July, Pritzker incorrectly told Capitol News Illinois that ARPA funds could not be used to pay down trust fund deficits although several states had already done so.

The measure also allocated $898 million in general revenue funds to pay off old group health insurance bills, an added $300 million to pension payments beyond statutory levels and $230 million to pay off the unfunded liabilities of the College Illinois savings program – all cornerstones of Gov. JB Pritzker’s debt retirement initiatives put forth in his budget proposal. Those allotments will come from the state’s General Revenue Funds from the anticipated Fiscal Year 2022 surplus.

The pension spending would create $1 billion in savings to the state’s pension system over its life, while the group health insurance payments would save over $100 million in interest and the College Illinois payment would create a $75 million savings, according to estimates from House Democrats.

“By following through on our commitments to dedicate one-time revenues to one-time costs or liabilities, we are delivering Illinoisans, a stronger budget and a stronger state for years to come,” Pritzker said.

This story has been updated from a previous version to note the Senate’s passage of the bill and include reaction from lawmakers and the governor.