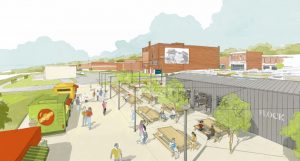 Artist’s rendering of the projected Flock food park, which is planned at the corner of Landmarks Boulevard and Ridge Street in Downtown Alton.

Supporters hope to make a big impression when they open Alton’s new food truck park, Flock, which is scheduled to officially debut in early May.

“I believe people want locally grown and sourced food, both on their tables at home and when they go out to dine,” said Jayne Simmons, president of AltonWorks and an Alton resident. “I have dreamed of opening a food truck park for quite some time – a place where friends and families can go to pick up a quick, delicious meal and just spend time together. The last two years have really opened people’s minds to how they get their food, where it comes from and what they want to experience when they nourish themselves and their families. I hope when they think of great food and great conversation, they think of Flock.”

Flock, located at 210 Ridge between Broadway and Landmarks and adjacent to the Jacoby Arts Center, will serve people from around Alton and the region with a variety of culinary choices sure to please everyone in your crew.

Operated by local restaurateur Laura Windisch and her husband Matt, Flock will initially host up to six food trucks at any point in time for lunch and dinner during the week and on Saturdays. Sunday’s hours and menu will focus on brunch. “Think biscuits and beignets washed down with mimosas and house-crafted bloody marys,” said Windisch.

Windisch and her husband moved to Alton from St. Louis in 2018. They currently own and operate Stacked Burger Bar, a restaurant in St. Louis.

The space where Flock is located next to a future outdoor park and playground, which currently serves as a parking lot. There was a groundbreaking conducted for the park with the Illinois Lieutenant Governor Juliana Stratton in July 2019.

In 2020, AltonWorks, an  organization formed three years ago with the idea of transforming Downtown Alton, took a pause during the pandemic to focus on addressing the local food scarcity issues the pandemic created during the economic shutdown. Since then, the organization remains dedicated to improving conditions for all residents and catalyzing a more vibrant, livable, and welcoming Alton.

The idea of Flock, in part, was nourished by the issues the pandemic raised and was lifted to a higher priority on the AltonWorks agenda by Jayne Simmons.

Additional information will be released closer to the grand opening of the park. Food truck operators interested in participating in the food truck park can contact the Windishes at hello@flockalton.com.