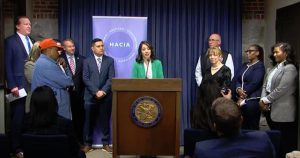 Republican lawmakers, including Jason Plummer, a senator from Edwardsville, far left, and minority contractor trade groups – including the Hispanic American Construction Industry Association, the Black Contractors Owners and Executives, and the Federation of Women Contractors – speak against House Bill 5412 at a news conference March 10 at the Capitol. (Credit: Blueroomstream.com)

SPRINGFIELD – A union-backed bill putting primary contractors on the hook for wage theft committed by their subcontractors is facing opposition in the General Assembly from minority contractor trade groups.

The measure, House Bill 5412, makes primary contractors – those who contract directly with the customer – liable for wages, fringe benefits and attorney’s fees if the subcontractors they hire fail to pay their employees.

In other words, it allows a worker with a grievance against the subcontractor to sue the primary contractor to rectify the situation. The statute of limitations in existing law allows 10 years for an employee to file such a suit.

Bill sponsor Rep. Marcus Evans, a Chicago Democrat who chairs the House Labor and Commerce Committee and is an assistant majority leader in the chamber, called the bill a cut-and-dried, pro-worker effort, as well as “a tax on the big guys.”

It would not require, but would likely lead to, primary contractors purchasing more performance and bid bonds or requiring subcontractors to purchase bonds showing that they have the funding to pay workers and complete the job adequately.

Despite backing from a powerful carpenters’ union, the Mid-America Carpenters Regional Council, the bill specifically exempts union projects, homes built on private property, and projects funded by state, local and federal governments. Evans said that’s because unions already have a method of recourse for wage theft through their union representation.

Minority contractor trade groups – including the Hispanic American Construction Industry Association, the Black Contractors Owners and Executives, and the Federation of Women Contractors – oppose the bill, citing concerns that it would drive up costs for small subcontractors and non-union shops.

Added bonding would also have a disproportionate impact on a sector of the construction industry that includes more minority- and women-owned contractors, according to Octavia Altheimer, the executive director at BCOE.

“This bill is more so about the haves and have nots. If you have it – the performance and bid bonds – it’s beneficial to you. If you don’t have it, then you suffer. Period, point blank,” she said at a news conference.

In short, they argued, the bill raises the cost of non-union labor.

“It’s all about risk mitigation at this point for the prime contractors,” Jackie Gomez, executive director of HACIA, said at a news conference. “They’re going to require wealth-based bonds, so if you think about your wage and welfare bonds, that’s an additional cost and burden to our small minority- and women-owned businesses that just cannot be afforded to them.”

While bond costs differ depending on a number of factors, a wage bond generally costs about 1 to 4 percent of a bond amount, so a bond covering $100,000 in wages would cost the contractor about $1,000 to $4,000, according to the advocacy groups.

Evans acknowledged the added cost to primary contractors, but he likened the matter to having car insurance.

“We’re going to cover workers and ensure that their wages are going to be compensated,” he said. “Somebody would have to bear the cost for that. In this piece of legislation, that’s the prime contractors.”

Terrance McGann, a lawyer for the Mid-America Carpenters Regional Council, said the strength of the bill is that it creates accountability for primary contractors “who previously walked away with impunity” in wage theft disputes.

“Whether it’s in an organized market or an unorganized market, the pattern that we have seen is that in many of these even mid- to large-sized construction projects, the lowest bidder generally gets the bid,” he said. “And there’s no responsibility on behalf of the general contractor to ensure the success of those subcontractors.”

In current law, workers who are stiffed by a subcontractor can sue the subcontractor or file a complaint with the Illinois Department of Labor, but that’s often a long process. McGann said the bill addresses the case where a subcontractor performs a job then files for bankruptcy or becomes insolvent without paying workers.

“And unless we can get an additional source of payment, generally there’s no remedy left to these workers and their families,” he said, adding the bill creates “an alternative means of recovery.”

In addressing opposition, Evans pointed to laws on the books in other states such as California, Maryland, Virginia and New Jersey, as well as Washington D.C. The fact that there are no widespread reports of minority contractors going out of business is proof enough that there will be no crippling effects of the new blanket liability bill, he said.

“Are they going out of business? No,” Evans said. “So we know that minority businesses operate with language like this, and it’s good for the worker.”

Dan Johnson, a lobbyist for HACIA, BCOE and FWC, said lawmakers should collect more data on the states that have passed such a law to get a clearer picture of the effects.

“Imposing expensive liability on tens of thousands of businesses without any data to justify such a detrimental expansion isn’t responsible,” he said.

The minority contractor groups suggested alternative changes to the current law, such as creating a reimbursement fund for workers paid into by increased fines on companies committing wage theft, and creating a list of companies and their officers on the Department of Labor website of those who committed wage theft.

Whether the bill in its current form has enough support in the General Assembly to become law remains uncertain.

It passed the House in two tries on March 3, receiving 62 votes – two more than the constitutional majority needed to pass – after failing to reach that threshold earlier in the night. No Republicans supported the bill.

In the Senate, the measure will be sponsored by Sen. Cristina Castro, D-Elgin, after paperwork is filed to shift sponsorship from Senate President Don Harmon, according to staff. Castro was unavailable for a phone call Monday but said in an email statement that discussions are ongoing.

“I’ve seen some of the concerns raised about the potential costs contractors might face with this measure, but right now, the hard-working laborers on these projects are facing the real burden of wage theft,” she said in a statement. “I do understand this can be a hard topic to navigate, and conversations with other legislators as well as stakeholders, including those currently still opposed, are still very much ongoing. I look forward to listening with an open mind any ideas those concerned might offer.”