The Great Rivers & Routes Tourism Bureau will celebrate local foods with an epic foodie experience throughout the month of June.

Businesses and restaurants that serve up great burgers, wings, ice cream and pizza will be highlighted throughout the month of June during Epic Food Month. Each week a different local favorite food will be celebrated. The epic weeks include: Epic Pizza Week, Epic Wing Week, Epic Burger Week, and Epic Ice-Cream Week. 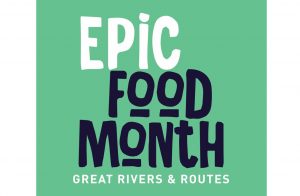 “We started highlighting our epic foods last year and it was an amazing success,” said Cory Jobe, president/CEO of the Great Rivers & Routes Tourism Bureau. “We had 100 different restaurants participate serving up thousands of burgers, pizzas and ice cream treats to residents and visitors alike. Now we want to take our epic foods to the next level.”

Deadline to participate in Epic Food Month is Friday, April 29. It is free for local businesses to take part. Any restaurant that participates in all four epic food weeks will be entered in to a drawing to win a $250 cash prize.

All participating businesses will be featured on the tourism bureau’s Epic Food Week web page which will also include any highlighted specials. The bureau will also promote the weeks through paid digital and social media efforts.