Joliet-based Landmarks Illinois has hired a new regional advocacy manager, Quinn Adamowski, who will serve as the organization’s frontline preservation advocate in communities in the greater Illinois area outside Chicago.

Adamowski’s main office is based in Joliet, and he will be traveling throughout Illinois to meet with community advocates and nonprofit partners as well as city officials and legislators to provide preservation resources and expertise as needed.

“Quinn is an exciting addition to the Landmarks Illinois team,” said Bonnie McDonald, president and CEO of Landmarks Illinois. “A local advocate, civic leader and educator, he has firsthand experience engaging an entire community around solving what seemed to be an insurmountable preservation challenge. Quinn will continue to be the knowledgeable, resourceful partner people statewide have come to rely on in Landmarks Illinois.”

Landmarks Illinois encourages communities in the greater Illinois area to reach out to Adamowski about their local preservation efforts and to find out more about how Landmarks Illinois can help. Adamowski can be contacted via email at qadamowski@Landmarks.org or by calling (815)-603-4901.

“I am honored to join the remarkable team at Landmarks Illinois,” said Adamowski. “I look forward to working with all communities in greater Illinois on their unique historic preservation needs, especially during a time when preservation is increasingly understood as a tool to protect and promote cultural heritage, the arts, tourism and economic development. Every community in Illinois can benefit from historic preservation, and it’s a privilege to have the opportunity to help people save places special to them and their neighbors.” 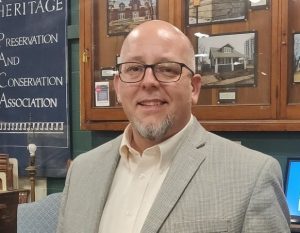 Prior to joining Landmarks Illinois, Adamowski established himself as a strong preservation advocate in his own Joliet community. Along with other coalition partners, Adamowski led the effort to preserve the Old Joliet Prison, which Landmarks Illinois called attention to on its 2002 Most Endangered Historic Places in Illinois. He continues to co-chair the coalition, which is focused on transforming the former prison property into a nationally renowned historic site. Adamowski also serves on numerous boards and commissions within his community, including the Joliet Historic Preservation Commission, Joliet Area Historical Museum Board and the Joliet Arts Commission.