Amazon is defending itself against a lawsuit filed this week in Madison County regarding the death of one of the victims of the Dec. 10 tornado in Edwardsville.

The lawsuit filed by by Clifford Law Offices on behalf of 26-year-old Austin McEwen “misunderstands” certain facts involved, Kelly Nantel, an Amazon spokesperson, said in a statement this week to the Illinois Business Journal. 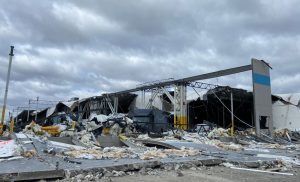 “This lawsuit misunderstands key facts, such as the difference between various types of severe weather and tornado alerts, as well as the condition and safety of the building. The truth is that this was a new building less than four years old, built in compliance with all applicable building codes, and the local teams were following the weather conditions closely,” Nantel said.

McEwen was an independent contractor of Amazon, driving for an Amazon delivery service partner. According to the suit, he was one of numerous individuals required to work during an Amazon “peak season” when Amazon management knew that conditions were highly unsafe as tornado warnings had been issued.

Tornado warnings had been issued for Southwestern Illinois as early as Dec. 9, 2021, and were re-issued on several occasions with growing concern and intensity over the next 24 hours, a press release from the Chicago-based firm said.

Initial investigation reveals that workers at the facility, including McEwen, were required to continue working instead of being told to evacuate when it was known of the possibility of a major tornado, the suit alleges.

But Nantel addressed the company’s response that night.

“Severe weather watches are common in this part of the country and, while precautions are taken, are not cause for most businesses to close down. We believe our team did the right thing as soon as a warning was issued, and they worked to move people to safety as quickly as possible,” she said.

She added: “We will defend against this lawsuit, but our focus continues to be on supporting our employees and partners, the families who lost loved ones, the surrounding community, and all those affected by the tornadoes.”

The lawsuit alleges the Amazon facility had no basement shelter despite this area of Illinois being prone to tornadoes, and no safety plan or adequate emergency plan required by the Occupational Safety and Health Administration.

The lawsuit cites reports that indicated Amazon directed McEwen and five others that were killed to shelter in a bathroom when Amazon knew or should have known that this location would not protect them.

Members of Congress have sent a letter to Amazon and its CEO Jeff Bezos seeking answers. The E-3 tornado is reported to have hit the distribution center in Edwardsville at 8:28 p.m. with winds reaching speeds of 150 mph. The roof of the massive facility collapsed, leveling the building.