A new food court is one of multiple recent additions to Eastgate Shopping Center.

Horace Greeley’s famous advice was to go west, but Todd and Julia Kennedy are putting their money east of the Mississippi River.

Specifically, they are rebuilding Eastgate Shopping Center in East Alton. Theirs is the kind of cautionary tale familiar to business people venturing into unknown waters, but right now it’s also a story with a rosy outlook. The Kennedys are four years into a major transformation of one of the region’s older shopping plazas, and the place is a stunner for those who haven’t seen it in a while, nearly filled with tenants after years of vacancies.

Their approach may hold lessons for other yesteryear shopping centers.

For the Kennedys, the project means most of their time and a lot of hard work. They became owners of Eastgate on Dec. 31, 2017.

“I live and breathe this place,” said Todd Kennedy, who admits to often working seven days a week. “It’s not about the money, and I know that sounds crazy. It’s about the accomplishment of taking something that doesn’t exist and building it from the ground up.”

For the husband and wife, ownership of the shopping center became something of a necessity. 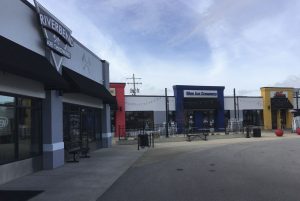 Julia Kennedy owns and operates Julia’s Banquet Center and Catering at the heart of Eastgate, a 25-acre plaza along Illinois Route 3. For years the banquet facility was located at Alton Square Mall before it was forced to relocate because of the mall’s long-term plans.

They settled on Eastgate — in the town where they live. Eastgate, which opened in 1960, was in something of a death spiral.

“We were in the Julia’s location around six years, and the plaza just kept getting worse and worse, and our sales kept getting worse and worse,” Todd Kennedy said. “The final straw was when Olin Brass had some bigwigs coming in for an event booked at the banquet center. When they got here, they were like, ‘There’s no way we’re having this event here.’ There were potholes in the parking lot as big as m 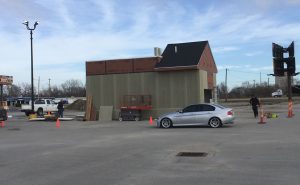 The Kennedys called the owner of the shopping center, who had long since moved to California. The Eastgate lease holders were paying money toward commons maintenance, and nothing was being maintained.

“‘We are done’,” Kennedy remembers telling the owner.

By that time, 2017, the original owner had just died, and his grandson was ready to jettison the East Alton property. He asked Kennedy if he’d be willing to buy it. Julia was more sure about the answer than Todd.

The couple crunched the numbers. They had the banquet center, one of the few highlights of the plaza. And they were just coming off the sale of four area Golden Corral restaurants, which they co-owned several years.

They approached Todd’s parents, Paul and Carolyn Crause, to partner in buying the center, under the name EG Plaza LLC. Eventually they also took on another, silent partner.

“When we started off, it was just my father and I. Bringing on the business partner was the changing factor,” Kennedy said. That allowed them to start pumping more money into the shopping center.

The overall investment is now at $11 million, he said.

East Alton government worked to help the Kennedys get incentive money from the business district and from the tax increment financing district. That boosted the Kennedys’ borrowing potential.

“None of it could have been done without the Village of East Alton,” he said. “Randy Nelson (treasurer) and Joe Silkwood (the former mayor) were the driving forces.”

Attracting tenants has been a combination of legwork and luck, and Kennedy thinks his approach might hold a lesson for other shopping center owners. In two words, it’s think local.

Kennedy and his wife, both area natives, work to draw local businesses with local owners.

Kennedy and family members have done most of the carpentry portion of various buildouts, which has allowed newer tenants to put money into their businesses rather than into buildings.

“We’ll design it, we’ll build it, we’ll give it to you, we’ll give you the keys. All you have to do is operate it. It takes the huge down payment away, and more money in their pocket for operating capital to get through,” Kennedy said.

“We changed the business model. That’s the key. A lot of people who built these 40 years ago haven’t changed their model. Almost everything we have here is local. JJ Thermos is from Bethalto. Elite Hockey, he’s from Edwardsville, originally from here. Key Largo, a spa, is from Granite City. The boutique is from Alton, the yoga business is from Alton. Another is from Brighton.”

Among the transformations at Eastgate are the addition of a food court area with outdoor seating.

Kennedy said he attracted Mr. Poncho’s Mexican Restaurant and Grill in part by eating at the business’ former East Alton location several days a week for months. He said owners David and Luz Sanchez have increased their business multifold.

Mike Hollis, the owner of Fan-A-Fare, a homestyle restaurant in the food court, was a chef who worked for Kennedy at 4204 Main Street Brewery in Belleville, which Kennedy operated until last year, when Covid forced its closure.

One of the best success stories, Kennedy predicts, will be Aria’s Cookies and Confections, owned by Aria Burnside, of Edwardsville, who as a 17-year-old won first place last year in Alton Main Street’s IdeaBounce, a competition for entrepreneurs. Among other things she won six months of free rental space at Eastgate, and Kennedy is now doing a buildout on the bakery, which will open in 2022.

Kennedy is especially proud of one of the newest additions, a coworking space called Alternative Office Space, which the Kennedys operate and which has been completed gutted and remodeled into decorative surroundings.

The facility opened in May and features 16 private furnished offices with phones, a conference room, printing machine, kitchenette and lounge area.

Kennedy and his crew also built a location for Modified Auto, a business that adapts vehicles for such things as car alarms, stereos, and window tinting, owned by Shawn and Jill Fowler.

“We got them to move from another location to come here. We built them a new location, and it has been thriving since they moved. They’ve been here five months, but they’ve just been killing it.”

Ironically, the Fowlers also just purchased a home that Todd Kennedy had bought to rehab on Tower Avenue in East Alton, four doors down from where Kennedy grew up.

The shopping center has the capacity for 31 tenants, and Kennedy thinks it will be full by May.

“Right now, we have six vacancies, but of those we have three leases on which we are starting to build out.

A couple of more leases have been signed and were pending announcement at the end of the year. One was an adult frozen beverage restaurant, the other was a pizza restaurant. A barbecue restaurant is also being discussed.

“If those happens, then every spot will be full,” Kennedy said.

PHOTOS: A panoramic view of Eastgate Shopping Center; the food court area; and Germania Brew. Work on the complex has been almost continuous in the last four years.