Renovations are underway on the north wing of the Illinois Capitol.

Plans include the construction of an underground parking garage, elimination of the circle drive on the north side of the Capitol and the addition of a new entry that improves access and security.

“We are very fortunate that we have a statehouse to be proud of. There are other states that have statehouses that look like a high-rise that you would see in Chicago, so we want to take care of a historic building and, unfortunately, the older buildings are the ones that need the most work,” said Andrea Aggertt, director of the Office of the Architect of the Capitol.

The scheduled renovations carry a total price tag of $224 million already appropriated by the Rebuild Illinois Capital Plan. The Illinois Senate will convene in the Howlett Auditorium after the 2022 spring session and will continue meeting there until January 2025 when renovations are scheduled to be completed.

The plans for the renovations include:

The purpose of the renovation is to address safety and security concerns, but also to return the historic architectural detail to the Capitol.

The restoration will also return some the history to the building that was completed in 1876 at a cost of $4.5 million, removing recessed ceilings, non-historic millwork and mezzanines from the north wing.

Construction for the underground parking garage will begin in coming weeks.

The goal of the renovation is to improve security by removing vehicles from close proximity to the building, creating a visitor screen area on the outside of the Capitol structure and installing electronic locking and lockdown capability and duress buttons.

Plans also include an underground conference and meeting room area.

Currently, there is one handicapped accessible entrance to the Capitol.

In 2011, the west wing of the Capitol underwent a two-year, $50 million renovation. The renovation met with scrutiny when the price for three mahogany doors clad in copper was revealed — $700,000. The original doors were replaced in the 1970s with glass and aluminum doors. 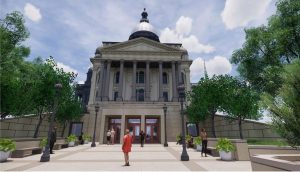 An artist’s rendering shows what a renovated north entrance to the Illinois Capitol will look like. The new entry, part of $224 million of scheduled renovations, will provide more access and security, according to the Office of the Architect of the Capitol.