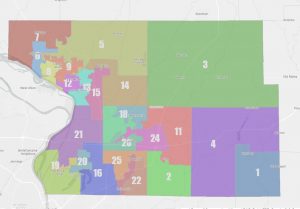 EDWARDSVILLE — The Madison County Board on Wednesday approved newly-drawn maps and downsized the number of its districts.

“We reduced the board by three seats, saving taxpayers money and providing substantially equal representation throughout the county,” County Board member Chris Guy of Maryville said. “It’s fair, reasonable and good for the taxpayers,”

The board voted 23 to 1, with Board member Nick Petrillo of Granite City casting the only “no” vote. Board members Michael “Doc” Holliday and Bill Stoutenborough of Alton, Mike Babcock of Bethalto and Jamie Goggin of Edwardsville were absent.

Petrillo said he was voting against the plan because he didn’t feel it best served the residents of Granite City. The map change consolidates two county board seats into a single district.

The map proposed by Guy reduces the board by 10 percent and saves approximately $435,000 on salaries during the next 10 years. County Board district lines are adjusted every 10 years to reflect population changes and to ensure equal representation of residents.

Guy began working on the 26-seat map in the spring with the help of other board members and officials. It was this third map; he previously put together 29 and 27 seat maps.

In May, Chairman Kurt Prenzler presented a 25-seat map drawn by the University of Illinois Geographic Information Systems Lab at Springfield (UIS) and the board rejected it.

Prenzler said he is pleased with the board’s decision to downsize the number of districts.

“It’s moving the county toward what other counties have done — reducing the size of their boards to save taxpayers money.”

“A reduction of the county board is a victory for the taxpayers in Madison County,” he said.