Southern Illinois University Edwardsville’s Chris Lynch, PharmD, professor and director of clinical programs in the School of Pharmacy received the Bowl of Hygeia Award by the Illinois Pharmacist’s Association. The award was presented at the IPhA and Missouri Pharmacy Association joint annual conference banquet on Saturday, Oct. 23, in St. Louis.

The Bowl of Hygeia is the most widely recognized international symbol for the pharmacy profession. Established in 1958, the Bowl of Hygeia Award is considered one of the profession’s most prestigious awards, recognizing pharmacists who possess outstanding records of civic leadership in their communities and encouraging pharmacists to take active roles in their communities. The award is presented annually by participating state pharmacy associations. 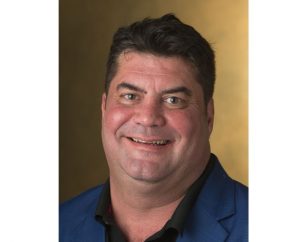 “Dr. Lynch has given far and above back to his community not just in Illinois but globally, and his love of patients and community deserves to be honored,” said IPhA Executive Director Garth K. Reynolds, BSPharm, RPh, MBA.

“As one of the inaugural faculty members in the SOP, Dr. Lynch was one of the first to reach out to the community and establish formal relationships that focus on improving the health of our region,” said SOP Dean Mark Luer, PharmD, FCCP. “These efforts are having a long-standing impact on others’ lives and are helping the SOP achieve its mission to improve the health and well-being of the region and beyond.”

Areas of Lynch’s community service include co-authoring a Health Resources and Services Administration grant that created a clinical pharmacist position within SIHF Healthcare and has to date made available more than $1 million in diabetes medication subsidies for the underserved in Southwestern Illinois.

Additionally, Lynch has served as pharmacy team leader and co-director of the Jamaica Dental Mission since 2006. The program allows student pharmacists to serve alongside dental students in providing care to greatly underserved populations. Services include obtaining and maintaining licenses to practice pharmacy in Jamaica, formulary management, medical histories, health screenings and care referrals, and dispensing medications. Between 1,200-2,000 patients are seen in these clinics each year. Lynch also coordinates donations of hundreds of toys for children seen in the clinics.

“I was taught early in life that I must open my heart to those who haven’t had the advantages I have had,” Lynch said. “Also, when I was a college student and was struggling to find my place in the profession of pharmacy, I was lucky enough to have a mentor offer his assistance. These things together helped to forge my belief that we each have a tremendous resource for service, and that service is something that can be taught.”

At the banquet, Lynch recognized his faculty mentor, Terry Seaton, PharmD, and one of his mentees, U.S. Air Force Maj. Michael Johnson, PharmD ’16, to demonstrate the continuum of community service that can exist across generations.

“Dr. Lynch is the epitome of service in my eyes,” Johnson said. “He has spent a lifetime in service, never knowing the true impact that he has in this world, without selfish motives or thoughts of personal gain. He is a prime example of service to both his students and colleagues and is incredibly deserving of this award.”