St Clair County Transit District on Monday celebrated the opening of the St. Ellen Park Trail – a $265,000 project that features an approximately one-mile long and 10-foot-wide paved path, extending east from Old Collinsville Road, at Ashland Ave., to Hartman Lane in O’Fallon, Ill., and connecting nearby households and businesses to St. Ellen Park. 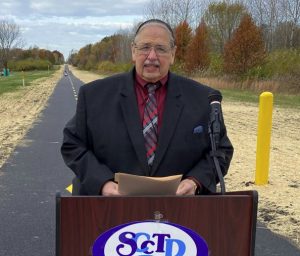 Representatives from SCCTD, the City of O’Fallon and Township of Caseyville, gathered along with a host of other local community leaders, to make brief remarks and salute the local government partnerships credited with making this project a reality before exploring the trail.

This project was made possible thanks to p 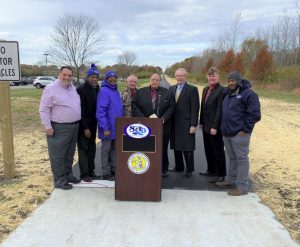 artnerships between St. Clair County Transit District, the City of O’Fallon and the Caseyville Township, which provided the no-cost easement necessary for St. Clair County Transit District to construct this trail. TWM, Inc., was responsible for the design and engineering of the project. Hank’s Excavating and Landscaping, Inc. completed the construction, which ranged from the initial grading to the finished pavement. The project got underway in March of 2021 and was completed under budget and ahead of schedule.

“The St. Ellen Park Trail demonstrates the effectiveness and efficiency possible when local governments work together for the common good of area residents,” commented Herb Simmons, Chair of St. Clair County Transit District’s Board of Trustees, during his remarks. “All involved in making this project come to fruition should be proud. This is a fantastic community amenity that will be enjoyed for many years to come.”

The St. Ellen Park Trail will eventually connect to Phases I, II, III and IV of the Old Collinsville Road Trail from Lebanon Ave. in Belleville to Ashland Ave. in Fairview Heights. The four phases total approximately 3.5 miles of new trail connecting to additional parks and to the 15-mile St. Clair County Transit District MetroBikeLink Trail System. These amenities provide access to six MetroLink stations and four different communities throughout the region.  Prior to these improvements, the system was comprised of a four-mile trail, extending from Southwestern Illinois College to the Belleville MetroLink Station. Since then, it has expanded to include the Swansea MetroLink, Fairview Heights and Shiloh-Scott sections, as well as the Englemann Park Connector and the SCCTD Orchard Loop Trail Phases I and II.  To learn more, visit www.scctd.org. 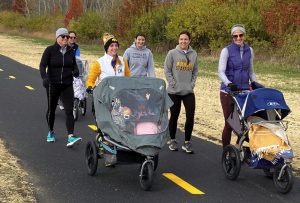