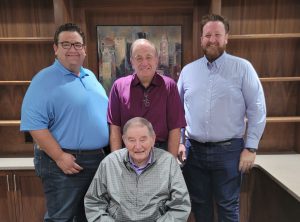 Three generations of the Hanselman family are shown in a recent photo at MPM Industries in Glen Carbon. They include former company president Bill Hanselman, seated; and his son and grandsons, standing from left, Andy Hanselman, Jeff Hanselman and Eric Hanselman. Bill Hanselman was president from 1954 until he retired in 1995, at which time son Jeff over as president and remains in that position today.

Back in 1921, the operators of Mechanics Planing Mill in Edwardsville could hardly be blamed if they failed to see the forest for the trees. No one could predict that one of their own employees would emerge to lead the company through the Great Depression and, with family help, for decades to come.

“It’s a tribute to people that really cared about the business,” Jeff Hanselman says, talking about the 100-year-old firm. “We’re not huge by any means, but there are not a lot of guys around who can do what we do, the same way that we do it.”

Hanselman is the third-generation owner of what is today called MPM Industries and located in Glen Carbon. At 69, he’s slowly transitioning to a fourth generation, represented by his sons, Andy, 44, and Eric, 41.

Milling lumber has been the Hanselman way since the business incorporated in 1921.

“My grandfather, William, worked here for the people that started the business,” Jeff said. “He was the plant superintendent. They built residential windows and doors and trim. He bought it when it failed in the 1930s.”

By 1954, William’s son, Bill, became president, and Bill’s own son, Jeff, was a toddler. The operation was located on Mill Street at the end of St. Andrew’s Street in a secluded enclave off Hillsboro Avenue — easy to miss if you didn’t know where to look. The eldest Hanselman lived nearby and walked to work every day. He died in 1996 at the age of 95.

Each succeeding family member brought something new to the business. In 1980, when Jeff joined, it was pretty obvious that the original 2.3-acre site was becoming landlocked even as the mill needed to expand.

“They didn’t have the foresight to buy the surrounding houses. The trucks were getting bigger, and the business was growing,” Jeff Hanselman said. “We probably outgrew it 50 years ago, but we stayed there until 1988.”

The decision was made to relocate to vacant buildings on Old Troy Road in Glen Carbon, formally No. 1 Cottonwood Industrial Park. Aside from a daycare that is part of the complex, MPM Industries also leases business space to Plumber’s Supply, Henry Kitchen & Bath, Sage Kitchen Design, and Kaskaskia Engineering Group. Nearby land originally planned for the industrial park was rezoned and sold for residential use.

All total, MPM has developed more than half its acreage.

Jeff Hanselman became president in 1995, and his father, Bill, retired about 20 years ago. The two elder Hanselmans worked well into their 70s, and Jeff thinks increasingly about phasing out his own role. No rush, though.

Meanwhile, his sons have taken on much of the day-to-day oversight. Andy Hanselman is general manager. Eric handles a lot of specialty products. Their mother, Jeff’s wife Linda, is retired but still handles payroll, working from home.

The business has around 30 employees, including 15 union carpenters.

Some work done in 1921 is still done today, but the company branched out as needs changed. MPM manufacture and distributes commercial building materials.

“We process wood to make moldings. We make doors. We don’t make windows. Andersen (Windows) came along and largely put an end to that part of the business. It used to be that all the windows were made at a local mill and shipped out.

“We had to change. Now we do casework and cabinetry as well. We have all kinds of sophisticated machines that make parts and pieces for cabinets.”

The company also has a metal division where it fabricates metal frames and doors and distributes hardware and other kinds of building materials.

MPM is largely a local business, focusing mainly on Metro East, although it does have some national connections.

“We were a national account for Applebees for years until they were purchased. We did stuff all over the United States for them,” Jeff Hanselman said.

Now, Goddard Schools, the privately run, early childhood school system, is one of its largest outside clients, a relationship begun in 2004.

“We do those all over the United States, about 1,200 of them and we’ve done the majority of them. It started off in Pennsylvania. I knew some people that were in on the ground floor, I had done some other work for them, and they asked me to get involved as it was getting franchised.”
MPM benefits from having a location in the central part of the country, he said, but its strength is still its own backyard.

“I don’t try to go out of the region here; there’s no need to. There’s not that many competitors that can do everything we do, that have the machinery we have, the infrastructure we have.”

The company’s “claim to fame” has been its ability to package complicated products and have them ready for pickup by a core of about 50 general contractors.

“They can have a one-stop shop,” he said.

Those contractors send specs to MPM for bidding, and the end result can be seen throughout the area, including at Anderson Hospital buildings, banks, schools, churches, SIUE, doctors’ offices and a lot of other institutions.

During a tour of the facility, Andy Hanselman pointed out the assortment of equipment and specialty services that make the business unique.

Solid lumber — such woods as poplar, oak, sepele and more — comes in on truck, gets milled and turned into doors, cabinets and casework. Huge ripping saws, edging and molding units are among resources.

Much of the production work is aided by computer programs.

Over on the metals side, doors can be outfitted with windows or light kits, made to fit standard size or custom.

During the tour, the family theme kept coming up.

Among other things he sees possible future expansion, but right now he is focused on getting passed pandemic-driven shortages of steel and other finished components that are playing havoc with completing products and making schedules.

Jeff Hanselman is less expansion-oriented but knows his sons will one day be running things.

“If my boys decide they want to go another direction with it, that will be their choice. If it makes sense to make changes and it’s an improvement for the business, I’m all in favor of it.”

This story originally appeared in the November issue of the IBJ. For more stories from the issue go to the Current Edition link at ibjonline.com 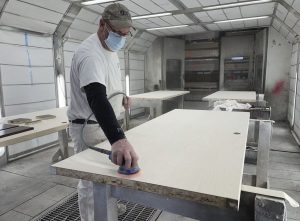 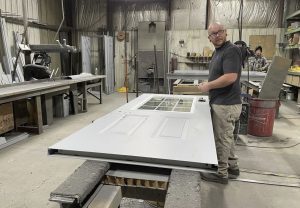 Jarad Franklin glances back as he works on installing a light kit in a hollow metal door. 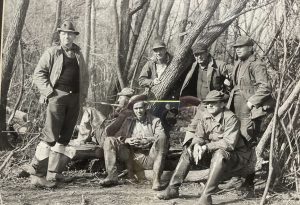 A photo that appears to show a group of hunters features the founder of Mechanics Planning Mill, now MPM. He is William Hanselman, seated at far right.